Margrave Dhakar is a human death knight of the Knights of the Ebon Blade. He is first found at the Fleshwerks in Icecrown, having been dispatched from the Shadow Vault with some reinforcements to kill the flesh giant Morbidus.[1]

During the Burning Legion's third invasion of Azeroth, Margrave led a group of Ebon Blade to kill Gorelix the Fleshripper on Niskara, but the attempt failed and most of the knights were killed while Margrave himself and his protege, Dagnar Stonebrow or Minerva Ravensorrow, were captured. Thus, a death knight adventurer and Baron Sliver were dispatched by the Lich King to succeed where Margrave failed, rescuing Dagnar or Minerva and fighting their way to Gorelix's citadel. Just as the three knights reached Margrave, however, Gorelix appeared and killed Margrave in an explosion of gore with a single blow from his axe, the

[Maw of the Damned]. After killing Gorelix, Dagnar or Minerva paused for a moment to pay their respects to Margrave before leaving with the adventurer and Sliver through the baron's 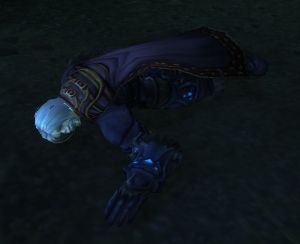 The Fleshwerks will never again produce soldiers for the Lich King's armies.

Let's kill this... thing... and get this over with.
Knights of the Ebon Blade, prepare for battle!

Stage 8
What are you doing? Run, you fools! The demon is near!