Marin Noggenfogger is the creator of the famous

[Noggenfogger Elixir] and, ever since the Cataclysm, the baron of the goblin city of Gadgetzan in Tanaris. He is married to Sprinkle, whom he previously considered a mere friend.[3] He is also a leader of the Steamwheedle Cartel[4] and is quite possibly the world's greatest alchemist.[2] During the third invasion of the Burning Legion, he joined the Uncrowned to give his expertise in poisons and alchemy.

Marin led the defense of Gadgetzan during the Legion Invasions, driving a massive shredder with twin flamethrowers against the Burning Legion attackers. After each invasion was successfully repelled, he offered "slightly discounted Noggenfogger Elixirs all around!"

Following the tragic Battle for Broken Shore, Marin revealed himself to be a part of the Uncrowned. During the class order campaign, he is found in the Hall of Shadows managing the Crucible of the Uncrowned. It appears Marin is the only person who truly knows how to work the venomous injections of the crucible into the Shadow's artifacts and is thus a very valuable asset,[5] though he uses this position for his own gain.[6]

In addition to aiding the Shadow on their quest to fight the Legion, Marin also asks for their help on a money-making venture: Stealing a powerful genuine love potion from the vault of Trade Prince Gallywix. Marin thanks the adventurer and serves them as a champion.[7]

Marin was among those who attended the private auction for the X-52 Personnel Armor.[8] After Gallywix took Hobart Grapplehammer hostage to get the armor for himself, Marin joined the battle against Gallywix.[9] After Hobart was freed and Gallywix beaten, the armor fell into the possession of Gallywix's old rival.[10]

Once his quest chain was completed, he would sell Noggenfogger Elixirs. 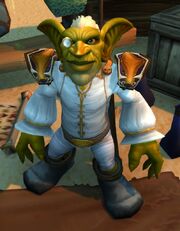 Marin in World of Warcraft.

On behalf of the illustrious and still neutral Steamwheedle Cartel, I hope you enjoy your stay.

Remember, everyone is welcome in Gadgetzan! Everyone except pirates.

When spoken to if the character has completed Marin's pre-patch 4.0.3a quests:

Welcome back, friend! If feels like it's been years since you helped me whip up my first Noggenfogger Elixir.

Megs Dreadshredder says: The paperwork's ready for you to sign, Marin. My people are just waiting on your decision.
Kelsey Steelspark says: Gosh, Mr. Noggenfogger, I know you wouldn't want to damage your reputation as a neutral trade entity by forming closer ties to the Horde!
Megs Dreadshredder says: This is laughable. You know what it's like trying to do business with gnomes.
Kelsey Steelspark says: Oh, oh, I know this one! It's better than doing business with failed goblins that had to beg others for help!
Megs Dreadshredder says: Why you little irradiated...
Marin Noggenfogger yells: AGH! Enough! You two are driving me INSANE! Start getting some freakin' work done around here or get the heck out of my town!

Marin in the Uncrowned Vault.

Living out there in the desert is rough! I get so thirsty standing outside in this heat.

Seen any strange things in the desert lately? Well, now that you mention it, yeah, I did see something I thought was a little strange yesterday afternoon.

I was running past some old troll ruins southeast of here; well, I wasn't really running, more like hopping... the sand's so hot!

Anyway, so I was hopping past these ruins, when I noticed a camp set up there. Seems like a funny place to set up camp, if you ask me... I would have poked around a little more but one of those crazy big vultures chased me off. 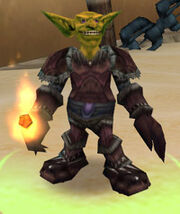 Marin Noggenfogger before the Cataclysm.