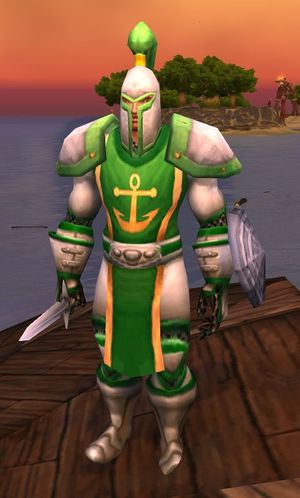 A Kul Tiras Marine on the shores of Durotar.

Marines (or mariners) are, depending on their faction, either footmen or grunts specialized in the support of naval and army operations on land and at sea. Marines may also serve aboard the various airships and gunships of the Alliance and the Horde, and are often working alongside sailors.

The nation of Kul Tiras is specialized in naval warfare and as such has a high number of marines among its forces.

Theramore also had many of them in its ranks. The Stormwind Seals and the Kor'kron of Hellscream's Vanguard may also be marines.

While human marines are almost always found among the crews of Alliance gunships, it seems the orcish equivalent for them is "reaver", for reavers can be found among almost all orc gunships.