Marisa du'Paige is a level 15 rare human mage that spawns in the caves outside the Deadmines instance.

A Defias mage and a skilled transmuter, Du’Paige is the daughter of one of VanCleef's most skilled lieutenants, who was killed during the Stormwind City riot. Marisa, a golden-haired woman in her mid-twenties, always had an affinity toward both magic and cruelty; and the Defias Brotherhood gives her opportunities to indulge in both. She oversees operations in the upper levels of the Deadmines and the training of magical adepts.[1] 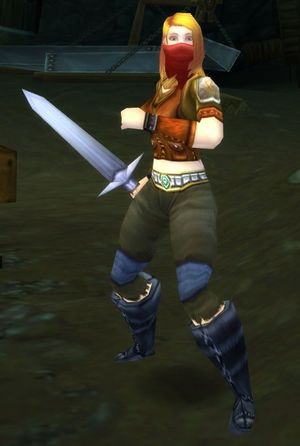