Marksmen shroud themselves in the perils of the untamed wilds, perfecting the use of weapons that are deadliest from great range. They've maintained little interest, however, in gaining the loyalty of the many beasts inhabiting these crude landscapes. Instead, the marksman blends into the surrounding environment, surveying behavior of all manner of predator and gleaning deadly methods for stalking their own prey. A sniper in hiding, the marksman unleashes arrows and bullets with deadly precision, exposing the weakness in whoever—or whatever—passes through their crosshairs.[1]

Marksmanship hunters are master archers or sharpshooters who excel in bringing down enemies from afar.[3] As such, they use rifles, bows and crossbows, but sometimes a melee weapon as well.

Draenei marksmen of the Aldor are issued blanks while training.[4] 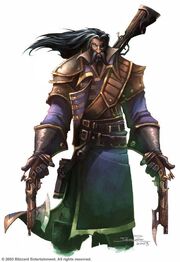 Marksmen are warriors who have embraced firearms as their weapon of choice. Studying the techniques of the dwarves, these soldiers craft their own weapons and hone their aim until they are capable of incredible feats of speed and accuracy. Marksmen learn to trust their instinctive ability with firearms to make incredibly skilled shots.[7]

'"A true marksman is not one who never misses, it's one who always kills."[8]