Marshal's Refuge was a neutral camp at the northern edge of Un'Goro Crater set up by Marshal Expeditions.

An expedition troupe led by Williden and Hol'anyee Marshal set foot into the crater. However, their endeavor was not fully prepared for everything, having underestimated the savagery of Un'Goro, and ended sooner than they wished. They sought higher ground from the savage beasts of the crater once their base camps were overrun, making their escape at Marshal's Refuge.[1]

At some point, the camp was visited by the orc Dhambeela and later by the tauren Kova Broadhorn and her gnome companion Miles Corebender.[2]

Stone Guardians, in great numbers, invaded Marshal's Refuge and established themselves in the cave located there, killing the kodo Dadanga in the process. The expedition had to abandon the camp after the new threat came their way, forcing the expedition to move southeast and form Marshal's Stand. Dadanga was buried in here, outside the cavern, in a grave marked as Dadanga's Grave.

The Stone Guardians seem to be investigating the refuge and the power crystal-filled cavern found at the back of the area. Interfering with this will cause the guardians to attack. 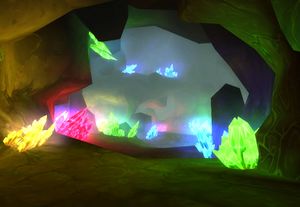 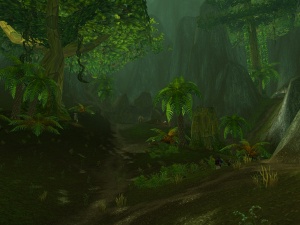 The closest thing to a town in Un'Goro Crater is Marshal's Refuge, the cavern in the north where Williden's people stay during their tenure in the crater. a semi-permanent home in Un'Goro. All they have are ramshackle storage sheds and a communal tent to shunt the rain away. Here these stalwart explorers live a primitive existence as they study the crater. Although among them they have the means to improve their settlement, none of them has bothered to spend the time doing so. They are too busy with their research. If you visit the place, better bring your own supplies — they only have enough to support themselves.[3]