Marshal Everit Reade was a Kul Tiran officer and House Waycrest retainer who served as head of the Waycrest Guard. A personal friend to Lucille Waycrest, he played a large role in the Drust incursion and the subsequent refounding of the Order of Embers. After helping to lead the campaign against the Heartsbane Coven, Reade was bewitched by the Coven's leader, Meredith Waycrest, forcing his allies to slay him. After the victory over the Heartsbane, he was succeeded as Marshal by Inquisitor Joan Cleardawn.

Everit was a good friend of Lucille Waycrest, as evidenced by his calling her Lucy.[2]

During the Drust incursion, Everit was doing his best to keep the situation under control. When he learned that Lucille was in peril, about to be hanged for the crime of witchcraft, he journeyed to Hangman's Point and interrupted the trial. He demanded the freedom of Lucille under threat of violence, planning to bring her back to Highroad Gate for her safety.[3] However, Lucille ordered him to stand down, preferring to prove her innocence over fighting. Everit reluctantly agreed, and instructed the Alliance emissary present to kill cursed animals and place traps near the main road to buy them time and protect them from potential witch attacks.[4][5]

As the adventurer returned with a letter to clear Lucille's name, Sister Widdowson from the Heartsbane Coven led an ambush on the humans and tried to capture Lucille. After she was brought down, the Marshal explained what was going on to the freed Lucille and told her that her father had been captured, and the Coven was gaining ground across the region. Lucille decided to take action and left with the Alliance emissary, while Everit returned to Arom's Stand and awaited her return.[6]

Lucille later returned with an ancient tome containing magical knowledge in hand. She informed the Marshal that she believed the Coven's magic had something to do with the Drust. Though Everit harbored doubts, he agreed to help. The first order of business was to recruit men for the reformation of the Order of Embers. From his own troops, he selected Captain Joan Cleardawn, Ensign Mace, Ensign Yorrick, Falconer Notley, and Lieutenant Sterntide. With everything in place, Everit stood alongside Lucille as she reignited the legendary Order.[7][8][9] 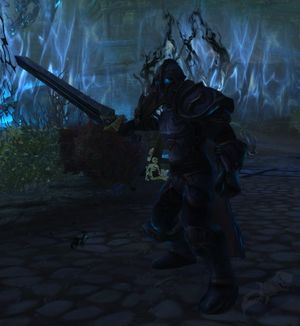 Everit Reade under The Mother's spell

Intending to go on the offensive, Everit and the newly dubbed Inquisitors launched an attack on Watchman's Rise. He killed his former men and ended the life of the witch controlling them. With the tower taken, he tasking their Alliance ally with scouting ahead and assisting an injured Notley in using Winston for scouting. From this, they learned that the blacksmith of Corlain was still alive and sent Yorrick to free him. After he was rescued, Angus Ballaster went to the basement of Watchman's Rise to begin crafting silver weapons. The Marshal had also ordered the death of Captain Goodspeed for deliberately betraying House Waycrest and joining the witches.[10][11][12][13][14]

Together, the Inquisitors, Lucille and Everit took down the Barrier blocking Upper Corlain and charged in. After culling the witches in the area, the group advanced as one to Waycrest Manor. Arriving outside the gates, they were in shock as they learned the true identity of The Mother: Lady Meredith Waycrest herself.[15]

Using her Drust magic, The Mother bewitched Everit and forced him to attack her daughter. Lucille begged him to fight it, but to no avail. The Waycrest daughter was forced to watch her beloved friend die in front of her. Lucille knelt in tears before a fallen Reade while the Order of Embers gave him a final salute.[2][16]

Marshal Reade's death galvanized Lucille and the others, and they would go on to defeat The Mother and purge Waycrest Manor, marking final victory over the Heartsbane Coven. In the aftermath of the battle, the Inquisitor Joan Cleardawn was chosen by Lucille to fill the role of Marshal of the Waycrest Guard, and carry on the legacy of Everit Reade.[17]

This land is dangerous. We should not dally here longer than necessary.