Martek the Exiled is a level 42 orc quest giver located in a small camp within the Scar of the Worldbreaker, along with Lucien Tosselwrench and Theldurin the Lost, in the Badlands. Prior to the Cataclysm, he was located in a small camp which was destroyed in the Valley of Fangs. It is unknown what happened to his former companions, Rigglefuzz and Jazzrik.

During Thousand Boat Bash, he is seen in Mirage Abyss in Thousand Needles along with Theldurin and Lucien.

Martek with new friends and camp after the Cataclysm 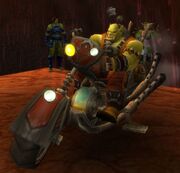 Martek the Awesome is the cool version of himself that he sees as he tells the 'real' story of what happened when Deathwing came, including 'four' babes and his flying Hog.

What brings you to a bunch of old, washed-up desert dogs like us?

Well, you found me. Good for you. Are you here about that axe I made for Gath'Ilzogg? Or are you here to reclaim Duchess Pamay's honor? Actually, I don't care which it is. If you're here to fight, then let's get it over with...