Maruut Stonebinder was a tauren shaman of the Earthen Ring, notably leading the forces holding the Temple of Earth in Deepholm where he perished.

During the Elemental Unrest, Maruut Stonebinder appeared in Thunder Bluff defending the city.

Later, he served as head of the Earthen Ring forces occupying Deepholm. He enlisted the aid of adventurers in reforming the World Pillar. He himself could not go as he had to remain near the rift in order to stabilize it. Eventually, through many trials and tribulations and aid from Therazane, the pieces of the World Pillar were retrieved. However, sensing that the World Pillar would soon be reassembled, the remnants of the Twilight Hammer staged an all out assault on the Earthen Ring. Once more, Maruut called on the adventurers to defend them as he and his fellow shaman worked to rebind the Pillar. The defensive lines held, but where the foot soldiers could not go, High Priestess Lorthuna was able, entering the main chamber and assaulting the participants of the ritual. Knowing that they may very well not get another chance, Maruut and the others did not stop the ritual even as they were attacked, and it fell on the adventurers to enter combat with Lorthuna alone.

Luckily, Therazane and her Stone Lords came to their aid, and helped repel the attack. The Twilight Hammer and Lorthuna were defeated, and the Earthen Ring managed to complete the ritual. Although the pillar was reformed, it came at the sacrifice of Maruut himself, his lifeless body being found in the aftermath. Earthcaller Torunscar commented that Maruut would be proud of this moment and of his death, as he had once said that he would gladly give his life to see their task done. 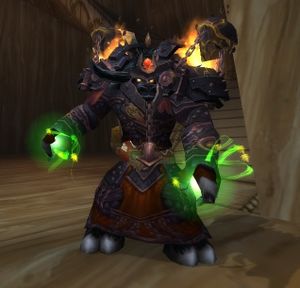 During the Elemental Unrest

Upon failing to secure the city:

In Deepholm
Deathwing's entry into our world opened a rift between it and Deepholm.
Rebuilding the World Pillar is the only way to stabilize the rift.