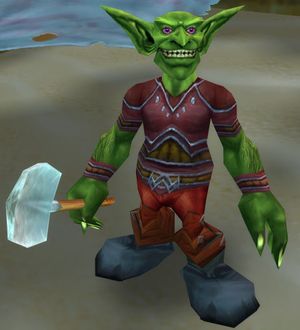 His model before Cataclysm.

Marvon Rivetseeker is a level 40 goblin located at the Broken Pillar in the contested territory of Tanaris. He studies the ancient areas of the world, and his workshop is located in the goblin town of Ratchet. He recently left the workshop in hands of his assistant and set off on an expedition in Tanaris, and was last seen heading south from Gadgetzan. Marvon's work on the pillar later became a subject of studies for archaeologists.[1] He and Larion are friends.[2]

During the Burning Legion's invasion, the area is under assault from the Legion and Marvon was rescued by the adventurers.

I know, I know, I'm out here in the middle of nowhere!

My home is actually in Ratchet, but after crashing my zeppelin here, I thought I might as well start the research I came here to do!