This article is about the character biography of Marwyn. For information on how to defeat Marwyn in the Frozen Halls, see Marwyn (tactics).

Captain Marwyn was one of Prince Arthas Menethil's captains during the Third War.[1] 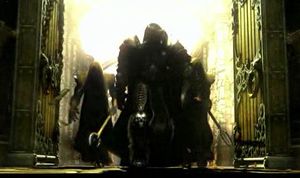 Marwyn and Falric enter the Throne Room with Arthas.

Marwyn had known Arthas all his life and saw him not just as his prince, but as a true friend. Marwyn was a close friend of Falric, and a confidant of Prince Arthas. Throughout Arthas' campaigns in the Third War, Marwyn was present to help oversee operations and lead the soldiers. When the time came to strike at Mal'Ganis, Marwyn, Falric, Luc Valonforth and Arthas drove into the heart of Northrend and achieved victory, though not without having first attained Frostmourne.[1]

Eventually, Arthas fell to the whispers of the blade. He murdered many of his soldiers from the 1st Legion, raised them into undeath and turned his two most trusted captains, Falric and Marwyn, into malicious death knights.[1]

Ultimately, Falric and Marwyn accompanied Arthas back to Lordaeron. They stood at Arthas' side as he walked into the throne room and murdered his father. It was Falric and Marwyn who had the task of slaying the citizens of the city, raising them into undeath using their newly gained powers.[1]

Marwyn, alongside Falric, made his first appearance in World of Warcraft as a boss of the Halls of Reflection, third wing of the Frozen Halls. They were both killed by the adventurers of the Alliance and Horde.