Master Craftsman Omarion <Brotherhood of the Light> is a friendly level 80 elite human, who was originally a level 60 elite found in the Deathknight Wing of Naxxramas. He was locked in a cage at the end of the first room before you got to Instructor Razuvious.

It appears that Omarion was rescued from Naxxramas before it left for the Dragonblight, and returned to Light's Hope Chapel in the Eastern Plaguelands after the Shattering, having fully recuperated. It seems that he continually converses with Leonid Barthalomew. 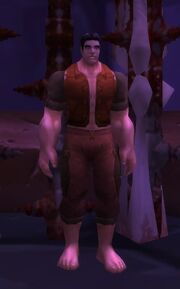 Omarion was originally added as an artisan blacksmithing, leatherworking, and tailoring craftsman. Unfortunately he was gravely injured inside Naxxramas and predicted that he didn't have much time left. He was willing to teach other master crafters his knowledge so it wouldn't die with him. Non-crafters could take his handbook to Craftsman Wilhelm at Light's Hope Chapel who could then make all the items as well, as long as the players provided the materials and pay a hefty fee.

Omarion taught the following plans and patterns to master craftsmen who had the required reputation with the Argent Dawn:

Is this the best they could do?

<Omarion musters the strength to laugh.>

You do not possess the resolve to face a monster like Kel'Thuzad. You will crumble before his minions - just like those that have come before you...

Leave me here to die. I refuse to return to a world that champions the likes of you.

I am a master <blacksmith/leatherworker/tailor>, Omarion.

Perhaps I can teach you something...

Omarion, I am not a craftsman. Can you still help me?

<Omarion grumbles something under his breath.>

But of course I can help you, dear <boy/girl>. It is my dying wish... my final desire. Please, take this handbook. The information on its pages are a compilation of all that I know and have learned in the past 30 some-odd years of my miserable life. Give the handbook to that good for nothing apprentice of mine that's probably sitting on his fat duff at Light's Hope Chapel.

Thank you, Omarion. You have taken a fatal blow for the team on this day.

There are those who would say that the Argent Crusade is a thing of the past. I am one of them, but not because the Scourge have fallen.

No...It is because of their stubborn ways. They've become too much like the church that they seceded from: too rigid, too governed by honor and order. This is what I'm trying to tell Barthalomew, anyhow.

Sure, it may sound a bit jingoistic, but it makes for a good debate.