Master Gadrin is a an elderly jungle troll of the Darkspear tribe located in Sen'jin Village in the orc and troll starting zone of Durotar. Bom'bay is his assistant.

Back in the Darkspear islands, Gadrin was the chief witch doctor of the tribe and the mentor of Vol'jin and Zalazane who also called him Gad. After the two returned from their adventure in First Home, Gadrin told them about the death of Sen'jin and orcs, but Vol'jin already knew this thanks to his visions while in First Home.[1]

As they had foreseen the lord of the orcish clans, Thrall arrived at the Darkspear islands, and rescued the tribe from the powerful Sea Witch. After settling in Kalimdor he invited the trolls into the Horde, where Gadrin became one of Vol'jin's most trusted advisors at their new home on the Echo Isles. Along with the young witch doctor Zalazane, Gadrin led the mystical training of many Darkspear priests and mages. However, Zalazane went mad from the mystical forces he had unleashed. The crazed witch doctor placed a curse upon the Echo Isles and drove Gadrin and his brethren away. Until Zalazane's Fall, Gadrin sought to end his rampage and put the souls of his cursed brethren to rest.[2]

Gadrin's deceased brother, Minshina, was calling him during his dreams, so he decided to send adventurers to retrieve Minshina's skull from the Echo Isles.

Before the Echo Isles were liberated shortly before the Shattering, he instructed the adventurers to gather tiki masks in order to put deceased trolls from the isles to rest. He also worked with them in order to summon Elortha no Shadra.

Since the Cataclysm he deals with the expansion of the humans from the Northwatch Hold.

He was present at the funeral ceremony of Vol'jin in the Dranosh'ar Blockade.

Following the Argus Campaign, as a troll representative, Gadrin was present in Spirit Rise in Thunder Bluff standing next to Baine Bloodhoof shortly before Magni Bronzebeard arrived to speak about the healing of Azeroth. Sylvanas wasn't looking forward to the conversation with Gadrin.[3] 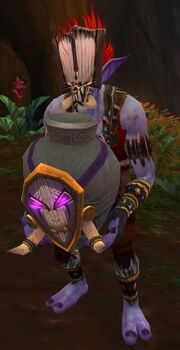 Gadrin summoning the Spirit of Vol'jin.

Since Vol'jin's death, Gadrin says that he often has felt Vol'jin's spirit whispering to him. His strength was the lifeblood of the Darkspear, and some would even say he was the spirit of the true Horde.[4]

The Echo Isles came under attack once again by Zalazane, who broke free of Bwonsamdi and came back as a lich with an army of undead. Gadrin led the defense of the isles.[5]

It was eventually discovered that Vol'jin's spirit was not in his urn, which deeply concerned Bwonsamdi. He tasked Gadrin, Talanji and Rokhan with performing a seance to find the lost Warchief.[7] With the presence of his old teacher and friend, Vol'jin appeared, not to reveal what happened to him, but to say that the Shadowlands were in turmoil: G'huun's influence was spreading without the Grand Seal, and trolls of the past and present alike cried out for justice against the Blood God. The time to end G'huun was nigh and Vol'jin requested they use his glaive to stab G'huun's corpse to draw his blood and show all of Zandalar that the Old God is dead.[8] Talanji then accompanied a team of Horde adventurers into the Underrot and Uldir to defeat G'huun and Gadrin was present when Talanji presented their victory over G'huun to the Zandalari Empire.[9]

During the Faction Assault on Drustvar, Gadrin aided Rohkan and Madam Konawla in conducting a ritual to imbue adventurers with the ancient powers of trolls in order fight against the Alliance's Purified forces.[10]

Gadrin was present at Rastakhan's funeral after the Battle of Dazar'alor.[11] Later, at Baine Bloodhoof's request, he performed another seance with Talanji and Spiritwalker Ebonhorn to call on the spirit of Vol'jin once again. When Baine asked Vol'jin who it was that had told him on his deathbed to make Sylvanas the new warchief, spirits of the dead attacked to silence the question.[12] Gadrin returned to Orgrimmar to call on Vol'jin's spirit at the site of his funeral pyre, with Bwemba's help, to search for answers.[13]

Years ago, I trained Zalazane and Vol'jin to master their craft. I never would have guessed how their destinies would shake de world.

There is something you wish to discuss, <class>... come, sit by me.

Though the Darkspear had no official leader after Vol'jin's death,[16] Gadrin appeared to have stepped up to the plate unofficially by Battle for Azeroth as shown in the Echo Isles questline, up until Rokhan formally became the Darkspear Chieftain.[17]