From Wowpedia
(Redirected from Maxwell Tyrosus)
Jump to: navigation, search

Lord Maxwell Tyrosus, nicknamed Max by Argus Highbeacon,[2] is a human paladin located at Light's Hope Chapel in the Eastern Plaguelands. He is the former leader of the Argent Dawn and currently an important member of the Argent Crusade.

Lord Maxwell Tyrosus joined Alexandros Mograine's crusade on the undead and insisted on working with other races. Maxwell accompanied his lord and comrades, Brigitte Abbendis and Fairbanks to the Scarlet Monastery where they found troll Zabra Hexx. While Brigitte insisted on killing him, he stopped her to speak with the troll.

Following Alexandros' demise, the order of the crusade became more zealous and fanatic and reformed itself into the Scarlet Crusade. He left the order and joined the Argent Dawn, eventually succeeding Lord Raymond George and becoming its leader in the Plaguelands and one of the highest-ranking officers in the organization as a whole. He found Darion Mograine and let him join the order. Maxwell brought him to the Chillwind Point and learned that Alexandros' spirit may be alive. He wanted to help Darion to attack Naxxramas but Darion insisted that he is very important for the Dawn. Instead, Darion found volunteers at the Point.[3]

Maxwell and the rest of the Dawn moved to the Light's Hope Chapel where the Scourge was about to attack them. Darion, having visited Tirion Fordring, returned to the Chapel and Maxwell revealed to him the Chapel's secret. When the Scourge attacked, he alongside other Argent Dawn members defended the place and witnessed the sacrifice of Darion. He then remained in contact with Tirion Fordring.

Lord Maxwell Tyrosus dealt a critical blow to Kirkessen the Zealous, a powerful lich who reported directly to the Lich King himself, during the Siege of the Sanguine, and the lich is now no longer able to assume a corporeal form.[4]

He resides in Light's Hope Chapel and rarely sees visitors from outside his organization. He was planning an offensive on Baron Rivendare of Stratholme before the Cataclysm. He also received a husk from a silithid which he thought to be useful against the Scourge.

In Wrath of the Lich King, he assisted the Argent Dawn during the Battle for Light's Hope Chapel.

In Cataclysm, Maxwell Tyrosus joined the Argent Crusade and continued with the admission of new members as well as reducing the Scourge numbers.

When the Broken Shore defense failed, Maxwell journeys to Dalaran to find a paladin champion. There he informs the paladin of what has happened and orders to commune with Lord Uther who revealed that Tirion yet lives. Maxwell thus led an invasion to save Tirion and recover the Ashbringer. Though Tirion dies, the artifact is recovered by the paladin champion. They both travel to Light's Hope Chapel to give the Highlord a proper burial, and to announce the paladin champion the leader of their order.

Maxwell participated in the Battle for the Exodar battling against High General Rakeesh, along with Lady Liadrin.

He later would ask the new Highlord to clear the area where Tirion fell so the Silver Hand could sanctify it.

When the Ebon Blade invaded the chapel and the sanctum, Darion strangulated Tyrosus.[5]

We must not allow that to come to pass - you are our single greatest hope to drive the demons back to the holes they crawled out of.

I humbly submit myself to your direct service, <name>. I will act as your eyes and blade where you are not; I will carry out your will until my dying breath.

Lord Maxwell Tyrosus at your service.[6]

With the Order of the Silver Hand reformed under your leadership, we have new direction and guidance.

We have much work ahead of us. 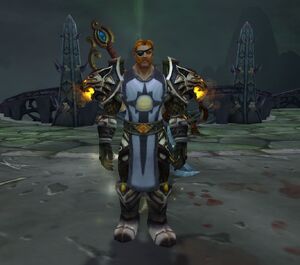 Do you feel it as well, Highlord? Something isn't right.

I've recovered a dark, but powerful crystal, Maxwell. If we can harness its power it might prove useful against the Legion.

I trust your wisdom, Highlord, but I can't say that this sits well with me.

How can we ever be sure that the power within that thing won't... change you?

There cannot be Light without Shadow. We must strike a balance.

You're right, but how can we ever hope to tap into that safely? Our power will only...

He is older than most Argent Dawn knights, at only a little over 40 years old,[7] but is still in peak physical condition.[8] He's starting to show his age, though he's still a valiant fighter.[7] Some say that Lord Maxwell Tyrosus, once a mighty knight, founded it in disgust after Arthas's betrayal, becoming its nominal head.[9] He is classified as a paladin and a warrior.[8]