Mayla Highmountain is the High Chieftain of the Highmountain tauren and leader of the Highmountain Tribe, assuming the chieftainship after her father Ulan was killed by Dargrul at the beginning of the war against the Burning Legion. After Dargrul was slain and the Legion defeated, Mayla and her people joined their distant kin in Mulgore as members of the Horde.

She became a staunch supporter of Baine Bloodhoof, speaking out in disgust when the man was imprisoned for working against Sylvanas Windrunner's increasingly immoral actions during the Fourth War. She accompanied Baine during his meeting with Anduin Wrynn just prior to the return of N'Zoth, and was ultimately seated on the Horde Council as the Highmountain tauren representative.

When the Burning Legion returned to Azeroth, Spiritwalker Ebonhorn called a meeting between the leaders of the tauren tribes — Ulan Highmountain, Jale Rivermane, Lasan Skyhorn and Torok Bloodtotem — as well as the Underking of the drogbar, Dargrul. When Mayla arrived at the meeting, she told the gathered leaders of the crushing defeat suffered by the Alliance and Horde forces at the Broken Shore. However, she also pointed out that the survivors were still holding the Legion's attention, possibly granting the people of Highmountain more time to prepare. When Spiritwalker Ebonhorn described a vision he had received of outsiders wielding the power of the

[Hammer of Khaz'goroth] against the Legion, Dargrul and the three lesser tauren chieftains were outraged, as in their eyes, the hammer belonged to Highmountain's people alone. Mayla asked the spiritwalker if he was certain, to which he replied that he was. High Chieftain Ulan then stated that the Highmountain Tribe would obey the spirits, to which the other chieftains reluctantly agreed. Dargrul, however, did not. Without warning, he leapt forward and grabbed the hammer while his hooded bodyguard summoned spikes from the earth to lock Jale, Lasan and Torok in place. Mayla attempted to strike Dargrul with her spear but was stopped by one of the spikes. When she called the Underking an idiot for starting a war between their two peoples, the drogbar replied by saying that he was not starting a war, but ending it — the Legion could not be reasoned with, and he knew that he would have to take control of his people's own fate when the tauren refused to act. While Mayla fought and killed Dargrul's bodyguard, the Underking used the hammer's power to instantly murder High Chieftain Ulan before fleeing.

As Mayla knelt over her father's corpse, she asked the other chieftains how many they could spare to hunt down the Underking. However, the Rivermane, Skyhorn and Bloodtotem chieftains had no intention of lending any aid, saying that they were powerless against the hammer and had to return to their own lands to defend them against the drogbar's assault. As Jale, Lasan and Torok departed from Thunder Totem, Mayla picked up her father's totem, telling herself that Highmountain would fall if the tribes did not stand together, and that if the hammer was what was required to reunite her people, then she would get it back.[1] 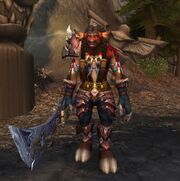 When adventurers first arrive in Highmountain to aid the Highmountain tauren, Mayla greets them and briefly explains the situation before sending them to help the Rivermane farmers and fishermen at Earthmother's Bounty and Whitewater Wash. After the Rivermane have been assisted and recruited to the Highmountain Tribe's cause, Mayla directs the adventurer to the Bloodtotem tribe (who instead join the Burning Legion, causing the Stonedark drogbar to join instead), the Skyhorn tribe (who once again declare their allegiance to Mayla, much like the Rivermane) and finally to Spiritwalker Ebonhorn. After showing the champion a series of visions of the ancient tauren hero Huln Highmountain, Ebonhorn heads west with Mayla to the Path of Huln in order to perform a ritual to aid in Mayla's ascension to the title of High Chieftain. Mayla herself does not see the point of this and protests that traditions can wait until the search for the Hammer of Khaz'goroth is over. Ebonhorn, however, is adamant, and leads Mayla and the adventurer, who has been assigned as Mayla's champion for the ritual quest, into the ancient vault of the former Earth Warder Neltharion. Together, the chieftain, the spiritwalker and the hero witness several visions depicting Huln Highmountain using the Hammer of Khaz'goroth to banish the corrupted Earth Warder from Highmountain. Before entering the final vision, Ebonhorn says that the tauren need a leader like Huln, who has the strength and courage to face any obstacle, and that there is one final vision Mayla must see before she is ready to become High Chieftain.

In the vision, Huln uses the Hammer of Khaz'goroth to purify a single black dragon egg, which hatches into a whelp named Ebyssian, who Huln then proceeds to name "Ebonhorn". As the vision ends, Spiritwalker Ebonhorn transforms into a full-grown black dragon and reveals himself to be the very same dragon, having watched over Huln's bloodline for the past ten millennia. Mayla is shocked at this revelation, but Ebyssian assures her that he is still the same spiritwalker she has known her entire life, before at last pronouncing her as High Chieftain. Mayla and the adventurer journey back to Thunder Totem, with the former saying that she now understands what Ebonhorn has been trying to tell her for some time: that the tauren do not need a hammer, but a leader willing to stand against any threat. After all of the allies of Highmountain have been rallied, Mayla leads the counterattack against Dargrul's forces, who have invaded the Snowblind Mesa. Despite the combined efforts of Highmountain, Rivermane, Skyhorn and Stonedark, Dargrul succeeds in destroying Snowmane Village and escaping into Neltharion's Lair, forcing the adventurers to use a hidden side entrance to infiltrate the drogbar capital and finally kill Dargrul.

During the campaign on the Broken Shore by the Armies of Legionfall, Mayla led a charge against the demons at the foot of the Tomb of Sargeras alongside Lasan Skyhorn and many Highmountain Warbraves, Rivermane Shaman, and Skyhorn Interceptors.[2]

After corresponding with Chieftain Baine Bloodhoof in the aftermath of the Argus Campaign, Mayla Highmountain accepted an invitation to attend a feast in Thunder Bluff. Yet when Baine and the Horde champion greeted their Highmountain tauren guests, Spiritwalker Ebonhorn was tormented by the Old Gods' forces of Uul'gyneth attempting to corrupt him,[3] and he and Mayla were forced to retreat back to Thunder Totem while Baine and the Horde champion defended Thunder Bluff from Uul'gyneth's invasion force.[4][5] Apparently, the wards Ebonhorn had been maintaining in Highmountain weakened just enough to let the Darkness seep through.[6]

Later on, Baine and the Horde champion traveled to Thunder Totem to offer their aid to mend Ebonhorn,[7] who has been fighting unconsciously to keep a darkness from consuming him. Mayla sent the Horde champion to Spiritwalker Graysky,[8] who has the Horde champion undergo Spiritwalker rituals to walk in the memories of Igrul the Scalebane,[9] Oenia Skyhorn,[10] and Huln Highmountain in order to restore the wards that kept the dark corrupting forces at bay.[11] After restoring the wards, Ebonhorn regained consciousness[12] and revealed Uul'gyneth sought to return and conquer Highmountain. Baine, Mayla, the Horde champion, and Ebonhorn left to join Lasan Skyhorn, Aviash, and Jale Rivermane at Highmountain Summit to thwart the Necrodark's ritual to incarnate Uul'gyneth[6] and restore the final ward. They failed, however, and Uul'gyneth was summoned into the physical realm,[13] leaving the Horde champion little choice but to vanquish Uul'gyneth the Darkness. After the battle, Mayla expressed her gratitude for rescuing her people from the Old Gods.[14] Impressed by the strength and courage of the Horde, Mayla and Baine traveled to Orgrimmar to pledge the Highmountain tauren to the Horde.[15]

Remarking that a new age dawns upon Highmountain, Mayla encouraged Highmountain tauren adventurers with demonstrating their strength to the Horde. She then sent them off to meet with Ambassador Blackguard at the Orgrimmar Embassy in Kalimdor.[16] After they brought honor to the Highmountain through their long sojourn, Mayla called them home to Thunder Totem to present them with the armor of their people.[17]

Mayla joined the other leaders of the Horde in attending Talanji's coronation.[18]

When Baine was arrested and Zelling was killed for their parts in freeing Derek Proudmoore from Horde captivity, Mayla questioned if her people should ever have left Highmountain if the Horde was willing to imprison those who act with compassion and honor. 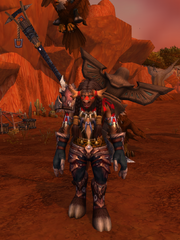 Mayla joined Varok Saurfang's revolution against Sylvanas Windrunner.[19] After the revolutionaries and Alliance secured the Dranosh'ar Blockade, Saurfang ordered Mayla to defend Thunder Bluff in case Sylvanas launched a counterattack.[20] During the conflict, Saurfang challenged Sylvanas to a Mak'gora, which ended in his death and Sylvanas's abandonment of the Horde. A stunned Lor'themar ordered for champions to report what had transpired to Baine. After learning what occurred, Mayla journeyed to Orgrimmar to attend Saurfang's funeral.[21] Mayla reflected that there were times during the war where she wondered if joining the Horde was a mistake, but that the Horde Saurfang fought for was Horde her people joined, the Horde that they must strive to be, and that there was no better way to Saurfang's memory than by continuing that journey.

Mayla was later seen with Baine in Stormwind Keep, observing the meeting between Anduin Wrynn and Wrathion.

At some point after its creation, Mayla joined the Horde Council. While remaining within Highmountain, Mayla sent a dignitary or ambassador to represent the interests of her people to Orgrimmar.[22] When the council convened with Queen Talanji of the Zandalari Empire, the implication that Lilian Voss was the only missing council member for most of said meeting implied that Mayla or her chosen representative was present.[23] Mayla was not present at the meeting when Zekhan was sent to Zuldazar nor at the congregation that ended in favor of Thrall and Ji Firepaw meeting with Jaina Proudmoore and Anduin Wrynn, suggesting that she, like Rokhan, was out of the city at the time of the meeting, presumably at Thunder Totem.

Mayla was with Baine in Thunder Bluff when the Mawsworn attacked and captured him.[24]

Note: Mayla has different click-on quotes depending on whether or not the player has completed

[100 - 110] An Ancient Secret. Prior to completing the quest, she has the following quotes:

After completing the quest, she instead has the following quotes. Her "Irritated" lines remain the same.

Dargrul the Underking is using my people as fodder for his new toy and army. He thinks by defeating us it will prepare him for the coming of the Burning Legion.

When I'm done with him, he will wish he had faced the Burning Legion instead.

The Path of Huln was something I knew I might have to walk some day. I had just hoped I could wait until after dealing with Dargrul to walk it.

[120] A Display of Power
Is this what the Horde stands for? Imprisoning those who act with compassion and honor?

Perhaps my people should have never left Highmountain...

My people are new to the Horde, and there have been times in this war when I wondered if joining was a mistake.

But then I would think of Saurfang, of what he represented, of the Horde he fought for. That is the Horde my people joined. That if the Horde we must strive to be.

I can think of no better way to honor his memory continuing that journey.