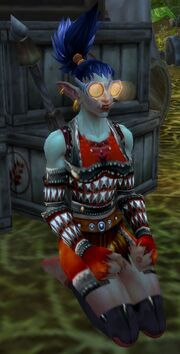 Maywiki is a level 60 quest giver located in the Explorers' League Digsite in the Cape of Stranglethorn.

Linzi Hewstrike was afraid that she was sad and lonely, so she asked an adventurer to give Maywiki a gift to make her feel better. Turned out that Maywiki wasn't lonely, she was just waiting for that particular adventurer.[2]

She later returned to Zandalar, and can be found at the Yojamba Exchange in Dazar'alor.

Maywiki formerly held the title "of Zuldazar", which she no longer carries for some reason. She was at one point located on Yojamba Isle in Northern Stranglethorn, and druids and shamans could turn in Paragons of Power to Maywiki in exchange for special armor made by the tribe. She, unlike all of the rest of the inhabitants of Yojamba, was not removed in patch 4.0.3a, but rather moved to the digsite.

In addition, she gave necklaces out depending on obtained faction: 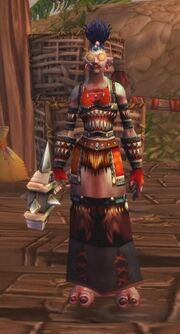 What you be expectin', mon?

Maywiki only be dealin' with the druids and shaman.

Maywiki, I need assistance in recovering a piece of my Augur's outfit.

Maywiki, I need assistance in recovering a piece of my Haruspex's outfit.

What are the Paragons of Power?
The Paragons of Power are remnants from the ancient Gurubashi Empire. We Zandalar seek them - not only are they of tremendous collectible value to us, but we believe that they also hold the strongest of mojo used by the old Empire.
Ya can expect to be findin' three kinds of Paragons in Zul'Gurub: coins, bijous, and primal items. Bring them to us in the quantities that we seek, and you'll be rewarded with some of the finest items we Zandalar have ever crafted.
Count on it, mon!