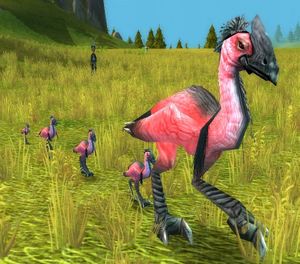 Mazzranache is a hostile level 7 rare tallstrider found in Mulgore, south-west of Thunder Bluff. He has a unique, pink skin.

Mazzranache is tameable by a Hunter. He is the most popular of the tallstrider family as a pet, due to his flamingo-like appearance. Up until patch 1.12, he had an unusually slow pursuit speed, which has since been normalized.

He is hostile, meaning if you get too close he will attack you, without you necessarily initiating the battle. He attacks with poison (a skill which is lost to him upon taming). He can also

[Charge], which he often does upon aggroing him. It will not knock you down, but it will deal 250% of his normal melee damage to you.