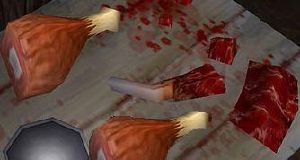 Meat is a type of food in WoW

Some items have meat-themed names and visuals, but do not actually function as meat. These are often quest items such as

World of Warcraft: The Burning Crusade introduced raw meat as a food type that could be eaten by dragonhawks, nether rays, ravagers, and serpents. Raw meat was separate from uncooked meat ingredients; it included items like

[Partially Digested Meat], allowing hunters to make use of them despite their usual status as vendor trash.

Raw meat as a food type was removed in