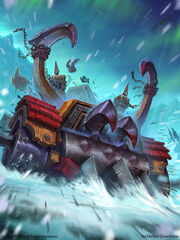 A meat wagon in Hearthstone.

"What the hell is that?"
"This crude contraption will allow you to transport the remains of our master."[1]
— Arthas Menethil and an acolyte upon seeing a meat wagon

One of the strangest and most dire tools utilized by the Scourge is the dreaded meat wagon (or meatwagon).[2] This rickety contraption is used to collect and store recently slain corpses from the field of battle. At any time, corpses can be pulled from the meat wagon and raised into undead warriors. When upgraded, the meat wagon can also fling diseased corpses at enemy units with its crude catapult device. An invaluable support vehicle for the Scourge, the meat wagon strikes fear and woe into the hearts of even the most resolute defenders.[3][4] Meat wagons use a Meat-A-Pult™ to fling corpses at the enemy.[4]

Meat wagons are constructed at slaughterhouses to lob plague-infected body parts at the enemy.[5] The disease clouds that accompany abominations are often spread to meat wagons, thus allowing the contraptions' rotting ammunition to deal further damage to the enemies of the Scourge.[6]

A meat wagon of the Scourge in World of Warcraft.

In World of Warcraft, abandoned meat wagons can be seen littering the landscapes in various places on Azeroth, but are most prevalently found in the Western and Eastern Plaguelands, Eversong Woods, Tirisfal Glades, and the Ghostlands. The Forsaken also make use of them. Some wagons have been converted into cargo haulers. These models lack the corpse hopper that stores the corpse ammunition, having the catapult right behind the roller.

A new type of meat wagon, seemingly made of saronite like most newer Scourge objects, can be found throughout Northrend and around Acherus: The Ebon Hold. This model lacks a Meat-A-Pult™ entirely, and seems to be more destructive than its predecessor.

The Warcraft III: Reforged Spoils of War Edition unlocks a

A weapon of both destruction and terror, the meat wagon is a vehicle constructed by the Scourge to collect corpses from the field of battle. These corpses can then be flung at the enemy with the meat wagon's catapult or, if the meat wagon carries a necromancer, raised to swell the Scourge's undead ranks.[7] It moves at 20 miles per hour and has a crew of 3 (1 pilot, 1 gunner, and 1 passenger). One is 20 feet wide and 35 feet long.[7]