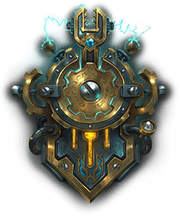 Mechagnomes can be unlocked by Alliance players who have gained Exalted reputation with the Rustbolt Resistance and earned the achievement   [The Mechagonian Threat].[2]