From Wowpedia
(Redirected from Mechagnomes)
Jump to: navigation, search

This article is about the titan-forged ancestors of modern gnomes. For the mechagnomes that dwell on Mechagon, see Mechagon mechagnome. For the allied race, see Mechagnome (playable).

Mechagnomes, or mechanognomes,[1] are a race of titan-forged creatures, resembling clockwork machines, who inhabit the Storm Peaks of Northrend. Creations of the titanic watcher Mimiron, they are the ancestors of the gnome race, having been transformed into them after falling victim to the Curse of Flesh.[2]

The mechagnomes were created by Mimiron (also referred to as "The Grand Architect")[2] within Ulduar, apparently as servants and caretakers much like the earthen.[1] When their creator was struck down by the corrupted Keeper Loken, the mechagnomes scrambled to save his fading soul by transplanting it upon a giant mechagnome body, though they could do nothing to help his deteriorated mental state.[3] Alongside the earthen, a number of mechagnomes left Ulduar and became caretakers of the facility of Uldaman.

Like the rest of the titan-forged, the mechagnomes were struck with Yogg-Saron's Curse of Flesh, though the ones at Northrend appear to have been unaffected. The mechagnomes of Uldaman, however, suffered the full blunt of the Curse 3,000 years in the past, where they degenerated into fleshy beings which would later become simply known as gnomes. Physically and mentally debilitated, these creatures lost all sense of purpose, abandoning the halls of Uldaman and fleeing into the surrounding caverns and mountain peaks. Only a handful of mechagnomes remained in the facility, still driven by their titan-forged imperative.[3]

At the Borean Tundra, a broken mechagnome by the name of Gearmaster Mechazod was rebuilt by a group of gnomes from titan parts found across the Fizzcrank Airstrip. Upon reactivating, he immediately declared his goal to rid the world of the Curse of Flesh and began to forcibly revert many of the gnomes into mechagnomes. Because of his deranged crusade against organic life, both Greatmother Taiga of the Horde and Fizzcrank Fullthrottle of the Alliance placed a bounty on his head, leading him to be killed by adventurers.

As Keeper Loken fell completely to the whim of Yogg-Saron, the mechagnomes of the Storm Peaks became his servants and allies of the iron dwarves, and are predominantly found around the Inventor's Library. Within Ulduar, a number of mechagnomes guard the outer defenses of the facility, protecting the path to the Flame Leviathan.

With the death of Loken, the cleansing of Mimiron's mind and the defeat of Yogg-Saron, the mechagnomes were freed from the influence of the Old Gods and once again serve as loyal servants of the titanic watchers. 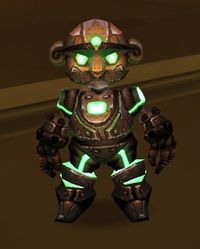 A mechagnome. The light emanating from them may be green, blue, yellow or even pink.

Mechagnome bodies consist of metallic plates and screws, marked by runic tracks of light. Some of them have mustaches and similar hair-fragments on their heads, also made out of metal. They are all masculine in terms of features, implying female mechagnomes are either non-existent or simply unseen. Being machines, they are likely genderless anyway.

The sounds they make resemble the voices of normal gnomes, just in a "metallic" fashion. Mechagnomes come in various sizes but are usually at the size of a normal gnome. They have three fingers on each hand.

Mechagnomes are immortal.[4] This does not mean they are invulnerable, just that they can't die from aging. They can, however, malfunction. When they do, they require someone else to repair them.[2] Additionally, mechagnomes can be taken apart without being permanently damaged (as long as they are put back together properly).[2]

Matching their appearance, mechagnomes act very robot-like; their behavior is marked by a pragmatic, objective and sometimes commanding way of thinking, and they seem to have a habit of meticulously analyzing their surroundings."[5][6] While this trait often may seem odd to the mortal races, it often makes it very easy to understand mechagnomes and pick up the information they give. When performing an action or a choice, mechagnomes often utter their reasoning out loud. From what they are saying, the minds of mechagnomes are clearly much similar to a computer-program, processing variables and executing commands.[5][6]

Apparently, they have a connection to what could be "titan databanks" - they can sometimes be observed "accessing" these databanks in order to retrieve information they need. This can be done either directly through the Databanks[7] or through nothing at all, as seen when Attendant Tock attempts to contact them when analyzing a piece of strange metal.

Mechagnomes possess the convenient ability of going into standby-mode. They often do this after completing or being released from a task.[6] Most likely they will stand in standby-mode until their master gives them a new order, as they have little reason to do anything else. It is unknown how long a mechagnome can remain in this state.

They have also been seen riding mechanostriders. The only ones doing this reside at the Inventor's Library, but they seem to have quite a bit of them. The model they use seems to be

[White Mechanostrider Mod B]. They adopted these inventions from the gnomes, for their own mysterious purposes.[8] Other mounts used by mechagnomes are flying machines.[9][10]

Amazingly, normal (fleshy) gnomes today still possess the robotic heritage of their ancestors. Normal gnomes can be reverted back into being mechagnomes, despite those gnomes having been flesh for generations. This is not done by merely adding a supplementary spell on normal gnomes in order to transform them, but oppositely by injecting them with something that removes the Curse of Flesh.[2] Likewise, gnomes who have been turned into mechagnomes may be reverted back to their original fleshy form by injecting them with something that 'reverses the reversion' of the curse. The player has to revert several newly "mechanized" gnomes back to their former self in the quest

[71] Re-Cursive. After being mechagnomes, most of these gnomes were apparently not fond of having been so. Then again, some of the gnomes felt that being mechanized had "perfected" them.[11] 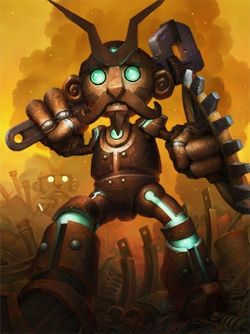 Engineers can craft a number of different mechagnomes to perform various services for a limited time.

Blingtrons are a series of diamond-encrusted mechagnome-like robots invented by Gnopetto Bizzfuse, known for their tendency to give out gifts to nearby adventurers.