For other uses, see Mechagon (disambiguation). 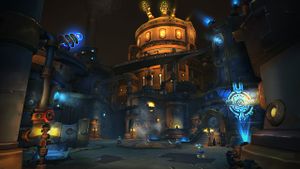 Mechagon City (with the High Tinkertory in the background).

Mechagon City (commonly referred to as the lost city of Mechagon) is an old gnomish city located on a formerly unexplored island in the Great Sea called Mechagon Island.[1][2] The Robodrome is located in the entrance to Mechagon.

The city can be entered via a Mechagon City Teleporter in Rustbolt by both factions.

Walton Cogfrenzy built the city as his chief achievement.

Mechagon City came under siege by Prince Erazmin's forces within the Rustbolt Resistance, attempting to overthrow his tyrannical father, King Mechagon, who sought to mechanize the entire world. With aid from adventurers, Erazmin's forces were successful in defeating the Arcforged and ultimately reuniting the mechagnome society under his rule. Erazmin, however, felt inadequate for ruling the Mechagon mechagnomes alone against the outside forces of Azeroth, and thus sought out aid from his brethren within the gnomes. Aiding with the healing of Gelbin Mekkatorque, who had previously been mortally wounded in the Battle of Dazar'alor, Erazmin ceded control of Mechagon to Gelbin to reunite the gnomekind. Dubbing him both High Tinker and King of the Gnomes; the mechagnomes reunited their society fully with gnomekind.

Considering Mechagon is the location of one of Mimiron's workshops, it could have been one of the lost titan cities like Uldaz or Uldorus. A titanic facility could also explain the presence of troggs on Mechagon Island and nearby Kul Tiras.