This article is about the island. For the city of the same name, see Mechagon City. For other uses, see Mechagon (disambiguation). 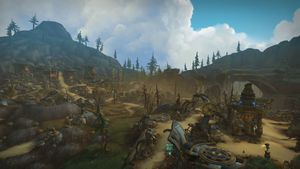 Mechagon Island[1][2] (displayed as just Mechagon in the overworld) is an island located northwest of Kul Tiras. Added in patch 8.2.0, it features one zone (slightly bigger than the Timeless Isle)[3] and a Mythic-only, Operation: Mechagon 8-boss megadungeon, in addition to the Robodrome arena.

A mystery awaits that is of particular interest to the gnomes and goblins. A previously closed vault in Kul Tiras has opened and within it a radio transmitter sends a signal for help and points to a new land to explore, Mechagon. This is an ancient lost city of the gnomes. The beginning of the adventure is within the Junker Wastes where heroes will be beset by death robots, but there are potential allies nearby. Hunted by robots themselves, the mechagnomes introduce you to a whole new society and take you to where higher cast gnomes live who have dedicated themselves to their king and have embraced robotics.

King Mechangon[sic] has a vision to return anyone of flesh into more pure robotic parts and it's up to you to put a stop to him.[4]

In ancient times, Mimiron built a vault here in which he kept technological and titan marvels.[5]

Before King Mechagon claimed the island, other civilizations lived upon it. The history of these forgotten people was buried beneath the land.[6] Evidence of two different civilizations appear, with one having been vrykul in origin[7] and the other appears to have been tortollans.[8] A very old night elven ring was also found, creating more questions about who lived here.[9] It seems pirates were also active around the area.[10]

King Mechagon was once the king of the Gnomeregan gnomes, who 400 years ago[11] led his followers in search of a mystical land of technology. He left no clues where he was headed and over time his tale became a legend to the gnomes.[12] In truth, King Mechagon managed to find this land and claimed it as his own. Since then, Mechagon Island has become the lost home of the mechagnomes.[13] Under the guidance of Walton Cogfrenzy, the gnomes erected the mighty underground marvel of Mechagon City.[14] Under King Mechagon, the gnomes began to convert themselves into partially mechanical versions of themselves; thus removing the problems of age upon their society.

Centuries later, King Mechagon decided that the time had come to remove the Curse of Flesh from all titan creations. He was busy creating the Mechoriginator, a machine he'd been perfecting in order to achieve his goal. Not wanting to see his father's plan come to fruition, Prince Erazmin began to secretly plan a revolt against him. His plans were unfortunately discovered when the elderly gnome adventurer, Kervo Cogpipe, single-handedly found his way to the legendary lost island and told the king of his betrayal. With no other choice, Prince Erazmin fled to Rustbolt with all those who supported him,[15] leading to a civil war between the Rustbolt Resistance and the Arcforged loyalists.

Ignorant of this conflict, forces of the Alliance and Horde had heard of a vault being discovered at the Abandoned Junkheap. An expedition under Tinkmaster Overspark were the first to arrive and were able to open the vault. Inside, they managed to activate a message by King Mechagon, which unfortunately was followed by the activation of a scanning device that killed all those who were not gnomes. It only stopped when Gila Crosswires was scanned.[16][17]

As the Alliance forces left the vault, a group led by Gazlowe had learned of the vault as well and had just arrived as they were leaving. With Overspark's departure, the Horde invaded the vault and killed all except for one gnome. Just as the Alliance did, the Horde activated the message and suffered the same fate until Gazlowe got the idea of using the captured gnome to stop the sequence.[18][19]

Arriving on the island, Overspark and Gazlowe were greeted by Prince Erazmin who explained the situation. Both sides agreed that despite being at war, they would help the rebellion.[20][21] With everything settled, Erazmin gave a tour of the island. He explained that Rustbolt was recently ransacked and he will need help to launch an assault to rescue his supporters. With help from both sides, the prince attacked Junkwatt Depot to free his captured allies and also regain Pascal-K1N6.[22][23][24][25][26]

Before leaving, the prince decided to deliver a message to his father by damaging the HK-8 Aerial Oppression Unit.[27] Arriving back at Rustbolt, he informed both forces that there was much to be done before advancing onto the next phase.[28] When preparations were complete, the allied forces launched Operation: Mechagon, leading to the tyrant King Mechagon's end. 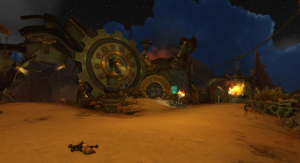 In an alternate universe, just as everything seemed to go well for the rebellion, Bondo Bigblock sold them out. In exchange for full mechanization, Bondo built giant bots and attacked Rustbolt. Soon after the successful invasion, a hologram of King Mechagon appeared in the middle of the base and declared victory. Following his triumph, he activated the Mechoriginator and destroyed all life on Azeroth. In the aftermath, Christy Punchcog and Izira Gearsworn were some of the few who survived. Izira's legs were destroyed, so Christy with the help of an adventurer was able to create a new set of legs for her.[29]

After getting back on her feet, Izira decided to go after Bondo Bigblock as revenge and killed him.[30] On her journey, she found her old prince Erazmin, transforming into nothing more than a rusty bot. Putting him to rest gave Izira an idea. Inside a Armored Vaultbot nearby, there was a

[Visual Holo Sphere], which held secrets to defeat King Mechagon. She asked an adventurer to retrieve it and send it to her main timeline self.[31]

Mechagon is a small island located northwest of Kul Tiras and has a similar landscape and fauna as Stormsong Valley. Rustbolt, home to the Rustbolt Resistance, is located on the northeast of the island while the entrance to Mechagon City, the Junkwatt Depot, is found in the southwestern hills. North lies a small mountainous area where the Scrapbone troggs make their home within Scrapbone Den. Southwest lies a small cluster of islands known as the Toothy Shallows. 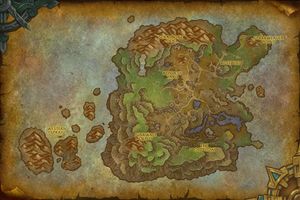