The Mechanar is the first wing of the Tempest Keep instance. It serves as a base for Pathaleon the Calculator and also generates manacells, which contain an incredible amount of power. It once belonged to the Naaru. The area is filled with Mo'args as well as Bloodwarder and Sunseekers blood elves.

This is the purple crystal building south of the main palace. At level 80, the instance is easily soloable on normal mode, while heroic mode is a challenge and requires high-level gear for most classes. At level 85, the instance becomes an easy gold run even in heroic mode.

Among the satellites of Tempest Keep, the Mechanar has been chosen by Kael'thas to be a factory to create large amounts of power. Mechano-Lord Capacitus appears to be the one creating it using the naaru-technology found in Tempest Keep, and the power is stored in manacells which piles up into walls and heaps inside the satellite. There they are guarded and handled by blood elves directly under the authority of Pathaleon the Calculator, Kael'thas' prime deviser. The elves are also aided by a large number of demons serving the Burning Legion, Kael'thas' new ally. The large amount of manacells are smuggled by ethereals to the Sunwell where Kael'thas plans to use them to power up the summoning of Kil'jaeden. Some of the manacells are found at the ethereal-camp Bash'ir Landing in Blade's Edge Mountains and even more of them are seen in the Magisters' Terrace close to the Sunwell. The Mechanar is the part of Tempest Keep most controlled by Kael'thas and his blood elves (the Botanica and Arcatraz are suffering various problems), next after The Eye.

The mighty Tempest Keep was created by the enigmatic naaru: sentient beings of pure energy and the sworn enemies of the Burning Legion. In addition to serving as a base of operations for the naaru, the structure itself possesses the technology to teleport through alternate dimensions, traveling from one location to another in the blink of an eye.

The Mechanar consists of two levels joined by an elevator. The first level has two named elites and one boss. Both named elites must be killed to open the elevator. You must also kill both Gatewatchers to open the Cache of the Legion. The first optional boss (Mechano-Lord Capacitus) has a decent loot table of his own. Both the second optional boss and the end boss of the instance are up the elevator. 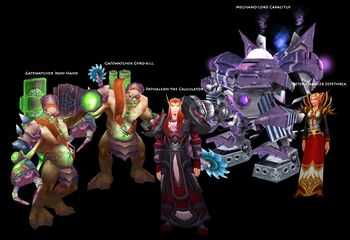 Gatewatcher Gyro-Kill and Gatewatcher Iron-Hand are mini-bosses. Each drops a portion of a key which is used to open the Cache of the Legion just before the elevator. 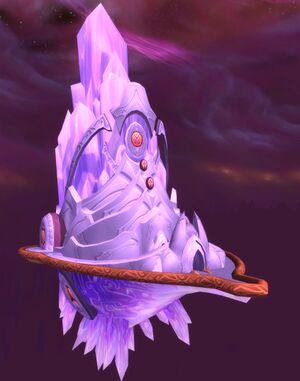