From Wowpedia
(Redirected from Mechanical Squirrel)
Jump to: navigation, search 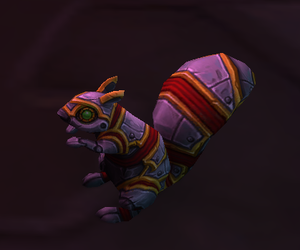 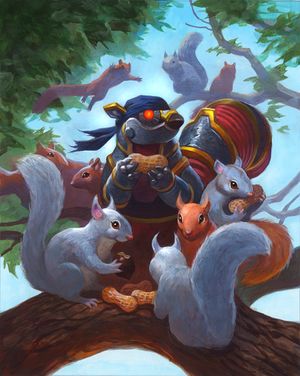 A mechanical squirrel attempting to infiltrate a group of actual squirrels.

A mechanical squirrel's logic center tells it to collect and store both nuts and bolts for the winter.[1] Considered by most to be a significant improvement to the 4000 series, there were nonetheless serious concerns about the amount of heat produced by the Rabid Nut Varmint 5000.[2]

The placard outside Moli Regnana's shop in Ratchet says "Familiars for the Rest of Us!" Moli invented the mechanical squirrel when she was feeling rather lonely one night, trying to program a pet to be utterly faithful to her.

The painfully cute and perky steam-powered result made her instantly rich, as everyone wanted one of these adorable, clanking "familiars." At first the squirrels merely followed the user, following a beacon that attached to the user's leg; but customers began asking her to add features, and the squirrel became more and more sophisticated.

Now the squirrel is still cute, and still follows its master, but it has two, needle-sharp retractable claws in each foot, and the tiny steam engine that powers it vents through the mouth.

Squirrels sold these days are also fitted with two homing transmitters, allowing the user to give one beacon to a companion. Thus, when a switch is triggered on the squirrel's hind foot, it follows the second transmitter, making it a stealthy messenger (Moli has also eliminated the worst of the clanking her invention made). The squirrel can follow a beacon up to fifty miles, moving at ten miles per hour. It is mostly watertight, but malfunctions if submerged in water.[3]