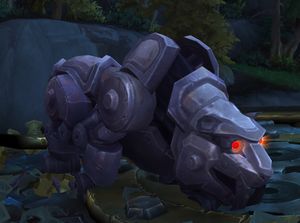 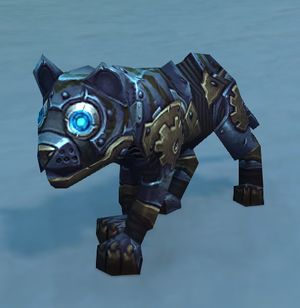 The original mechanocat prototype was designed by Head Machinist Sparkflux himself when Mechagon was first founded. The cat's superior speed and handling far outclassed all other vehicles available at the time. Yet despite its unparalleled performance, the mechanocat was never mass produced, as the less expensive mechanocrawler was widely considered a more cost effective mode of transportation for King Mechagon's military forces. Cogheads and recyclers, however, soon acquired Sparkflux's schematics and began production of the mechanocats on a smaller scale. Today, any mechagnome worth their grease has built a custom mechanocat of their very own. Customization options are everywhere with the mechanocats. Raised shocks, Long tails, Variable claws, and of course custom paint jobs. Fireball red still remains the most popular color for new cats.[1]

A mechanocat delivers raw power with reliability. A little cog grease and a hydro spanner will keep a mechanocat riding well for years.[2]