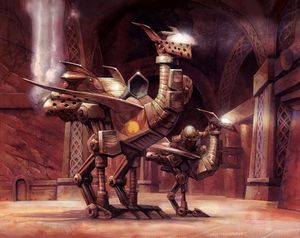 “The quintessential creation of Gnomish ingenuity.”

Mechanostrider mounts are Alliance only mounts. They were originally introduced into the game as gnome and dwarf only mounts. Later the racial restrictions were removed from all mounts.

These mounts give a 60% speed increase on land. You can purchase these mounts from

Milli Featherwhistle <Mechanostrider Merchant>, north of Kharanos in central Dun Morogh so long as your character has riding skill of 75 (obtainable at level 20). If you are playing as any race other than a Gnome, you will also need to have Exalted reputation with Gnomeregan.

These mounts give a 100% speed increase on land. You can purchase these mounts from Milli Featherwhistle so long as your character has riding skill of 150 (obtainable at level 40) and are restricted similarly to the apprentice mounts above.

These used the old epic mount graphics and as of Patch 1.4 are no longer obtainable.

[Black Battlestrider] is available from

Lieutenant Karter <Mount Merchant> in Stormwind for 15 Marks of Honor.

[Vicious War Mechanostrider] can be purchased with a

These following mechanostriders can be purchased from the Argent Tournament. You must have completed

Champion of Gnomeregan or be a gnome to gain access to this quartermaster.

Given accidentally to a player by a Blizzard GM. It is the rarest mount in Azeroth as only one exists.