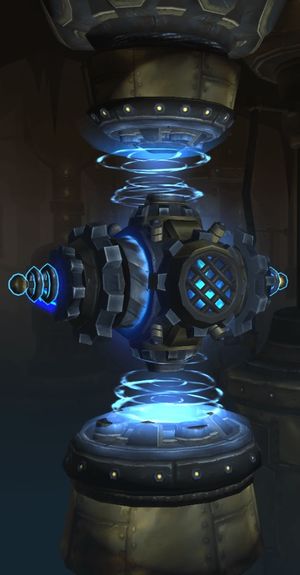 The Mechoriginator can be seen from the High Tinkertory in Operation: Mechagon.

The Mechoriginator is a device in Mechagon City that King Mechagon plans to use to purge the Curse of Flesh from Azeroth and mechanize the entire world.[1]

The device was used on Kervo Cogpipe as a form of "reward" for informing King Mechagon about Prince Erazmin's betrayal.[2]

Erazmin has stated that the device could theoretically work as his father plans, and convert races changed by the Curse of Flesh to what they had been originally; gnomes would become mechagnomes, dwarves would become earthen, and so on. However, any race that is not descended from the titan-forged (for example goblins, trolls, elves, or alien races) would be eradicated completely. Whether his father doesn't know of this flaw or simply doesn't care is uncertain.

In a future alternate timeline, King Mechagon won and activated the Mechoriginator.[3][4] However, it seems even in this reality its effect is slightly flawed. According to this reality's version of Izira Gearsworn, his research was "corrupted", and incinerated most living things, turning Mechagon Island into a burnt wasteland, which not only has robots but some undead as well. Those who were partially mechanized like herself and Erazmin survived, although many were killed or converted in the ensuing battle.

Interestingly, despite Erazmin initially believing that a big danger of mechanization is losing one's emotions and sense of being, this is not true with Bondo Bigblock who makes a deal to be completely mechanized, and he clearly recognizes the adventurer. Another irony is that if defeated, Bondo is one of the mobs that can drop the