For lore about Medivh, see Medivh.

Medivh can only be found in the mission Medivh. He proves to be the most powerful unit and should be approached with caution, as he has extreme attack speed and range. 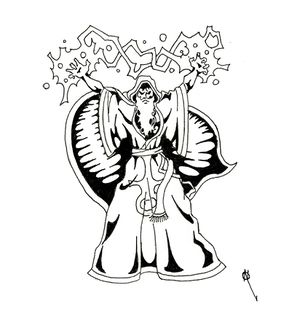 Medivh as seen in the Warcraft: Orcs & Humans Manual.

The Warlock calls forth hordes of deadly, poisonous spiders to aid him. Several spiders come at any one summoning, and will swarm over the enemy as the caster directs. They crawl through gaps in the enemies armor and bite them with their poisoned fangs, injecting their deadly juices into the bloodstream. As the enemy falls to the ground, he literally burns from within.[1]

The most powerful spell ever rumored to exist. Legends say that the caster would have the ability to summon forth a daemon by allowing his body to be sacrificed to enable its existence in this plane. The daemon would then be guided by the spirit of the caster to do his bidding, but should the daemon be destroyed, the warlock's life would be forfeit. The truth to this tale is questionable, but the incantations and rituals used to summon the creature may lay in some lost runic writings. The dream of every follower of the underworld is to rediscover these incantations and be able to command the power of the Daemon.[1]