For the character from the main universe, see Medivh.

“The fel... it's twisted me, I... I don't even know what else I may have done. I just don't remember. Everything I've thought to protect, I have destroyed.”

Medivh was a Guardian of Azeroth, and childhood friend of Llane Wrynn and Anduin Lothar, until his corruption by the fel turned him against them. After unwittingly opening the Great Gate and inviting the Horde to Azeroth, Medivh was fought by Khadgar and Lothar, and eventually killed.

Despite his actions while possessed, Medivh remained a defender of Azeroth, and before dying was able to briefly assist the army of Stormwind in their assault on the orc encampment. Khadgar would later discover that it was the burden of isolation imposed on Medivh by his role as Guardian that made him vulnerable to the fel's corruption, his loneliness ultimately leading to his downfall.

“No mage shall be your peer; none, your master. Your responsibility will be absolute.”

Already a Novice in the Kirin Tor, Medivh became Guardian at 11. He was initiated by the Council of Six, in a special meeting in the Chamber of Air. After being tested by Archmage Antonidas and Finden, he was branded with the Eye of the Kirin Tor, and welcomed as the new Guardian.[4]

“If love is what you need, you must be willing to travel to the ends of the world to find it. Beyond, even.”

In his youth, Medivh traveled far and wide in an effort to feel a connection with the souls he was charged with protecting. During these travels he fell in love with a woman belonging to a race of strong and noble people, though their relationship was not meant to be.

But Medivh's travels would lead him not only to love, but to great evil. Seeing it as his duty to find and master all forms of magic, Medivh's search eventually led to him to the depths of the void, where he came upon the terrifying power of the fel.[5] 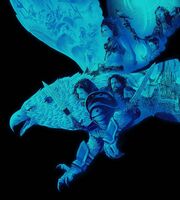 “You've changed so much. You look like the weight of the world's on your shoulders.”

With his training complete, Medivh traveled to an inn to reunite with his childhood friends, Prince Llane Wrynn and Captain Anduin Lothar. With Medivh and Lothar on the verge of growing into their responsibilities and Llane spoiling for action, the trio set out for the jungles of Stranglethorn Vale to investigate a string of recent troll attacks on human settlements. After surviving an ambush they entered an ancient troll temple and did battle with a warlord who sacrificed his retainers as fuel for the fel, empowering himself. Medivh harnessed his mastery over the arcane to destroy the temple and kill the troll, though the son of the warlord would swear vengeance on the humans as a result.

After this incident Medivh took up residence in Karazhan and began researching the fel in hopes of controlling it. As war broke out between the trolls and humans, Medivh was repeatedly called upon to help battle the invaders, but was frustrated by his inability to prevent the deaths of many soldiers and civilians, becoming increasingly reclusive as he focused more time and energy on experimenting with the fel. In time the trolls laid seige to Stormwind, invading the outer city and killing King Wrynn. During the ensuing battle Medivh attempted to rely only upon the arcane, but in a moment of desperation was ultimately forced to unleash the fel, killing the attackers. For this he was honored as a hero by the newly crowned King Llane Wrynn, with a statue commemorating his victory erected in Stormwind. Medivh, however, would spend the next six years isolated in Karazhan.[6]

“It's the loneliness that makes us weak, Khadgar.”

Over time the burden of isolation and loneliness placed upon him by his role as Guardian began to weaken Medivh, and despite his best intentions, the fel began to consume him. Twisting his very soul, the dark magic turned his love for Azeroth into an insatiable need to spread the fel.[5]

As the corruption progressed he began to at times be possessed by a demonic entity, his appearance twisting horrifyingly, and his will apparently not his own. Medivh would later have no recollection of these events.[3] It was during one of these possessions that Medivh made contact with the orc warlock Gul'dan, sharing with him the secrets of the Great Gate and leading him and the Horde to Azeroth. Medivh later opened the gate to Azeroth, with Gul'dan providing fuel in the form of life energy drained from draenei prisoners.

Medivh would progressively lose himself to the fel. While the energy of Karazhan's arcane font would serve to restore him and infuse him with energy, over time it would do so more slowly and less thoroughly than it once had, the Guardian recovering less completely each time he pushed himself.[8] Medivh would find himself battling for control against a hooded figure that seemed to him to be formed out of the thunderheads themselves, whose eyes glowed green.[9]

Moroes was aware to some extent of his master's struggles with the fel, and would aid him in recovering each time, believing that he would continue to succeed in mastering the corruption.[3] Over time Medivh would send away the community of servants in Karazhan, having ceased to receive guests, until finally only Moroes remained.[10] Moroes did not seem entirely happy with his master's isolation, later commenting that the arrival of Lothar would do the Guardian good.[10]


With the arrival of Lothar and Khadgar, Moroes escorts lothar to Medivh's chambers.

As a child, Medivh is described as having brown hair and eyes that changed from blue to green depending on the light.[12] In maturity he was tall and well built,[13] with a fit but ordinary build,[14] and had long, loose hair and a beard of sandy brown.[13]