Meerah is a vulpera initially encountered at the Vulpera Hideaway in Vol'dun. Throughout the Vol'dun storyline, she transports the adventurer and their companions through the desert using her carriage drawn by her two alpacas Dolly and Dot. She is cheerful and kind, but Nisha states that she is blind to the true dangers of the desert.[1]

Meerah finds Bladeguard Kaja in the dunes after Kaja is nearly killed by Emperor Korthek and, along with Kiro, helps the adventurer restore Kaja's health.[2][3] Meerah also reveals that she found an incomplete journal, which turns out to have been written by Warguard Rakera, the troll whom Kaja and the adventurer traveled to Vol'dun to find.[4]

Later, Meerah transports Kaja and the adventurer to various locations around Vol'dun using her carriage drawn by her two trusty alpacas Dolly and Dot; first to the Withering Gulch, where they pick up Jorak,[5] then to the Temple of Akunda, where they eventually find and rescue Rakera,[6] and finally to Zul'Ahjin. During the latter journey, the caravan is ambushed and set on fire by General Jakra'zet's assassins, forcing the passengers to hop off and causing Dolly and Dot to run off into Zul'Ahjin,[7] but Meerah quickly catches up with and ties down the alpacas within the ruins.[8]

Later, Meerah is encountered by Vorrik and the adventurer at Vorrik's Sanctum, sheltering a group of vulpera slaves that have been rescued from the Faithless sethrak.[9] She explains that at night, Kiro and Nisha sneak down into the sethrak slave camp below, rescue the most vulnerable vulpera, and lead them to the sanctum. Meerah then secures safe passage out to the dunes, where there are caravans waiting to take them away to safety.[10] After the adventurer arrives, Meerah asks them to rescue a group of vulpera children being held in the slave camp by Appraiser Versik.[11]

After the Faithless ruler Emperor Korthek is eventually defeated,[12] Meerah, Dolly, and Dot can be found back at the Vulpera Hideaway with Kiro and Nisha.

When the armies of Zul and Mythrax attacked Zuldazar, Rakera had Meerah transport her and Kaja to the city. They took the opportunity to bring the two loa Akunda and Kimbul with them. Once they arrived, Meerah accompanied Rakera, Kaja, and Talanji through the Zocalo and helped fend off Mythrax while the adventurer and King Rastakhan went to confront Zul.[13] 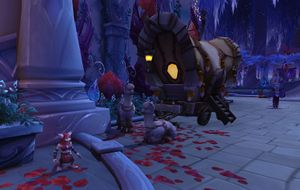 Meerah and her wagon in Suramar.

The vulpera eventually decided to join the Horde in order to explore the world beyond Vol'dun. Meerah and Nisha accompanied Kiro as he traveled to Orgrimmar to speak with Baine Bloodhoof, but Baine was forced to decline giving them membership as troubles facing the Horde's current allies had stretched the faction's resources thin.[14] The vulpera decided to offer their help, with Kiro sending Meerah to Suramar City to help Vintner Iltheux with the production of arcwine.[15] With the help of the Horde adventurer, Meerah discovered that wine production at the Twilight Vineyards had gotten into disarray because Iltheux wasn't properly utilizing the help he'd been sent by the Horde, having assigned his assistants—Micah Broadhoof, Boss Mida, and Nomi—to roles they were completely unsuited for.[16] Meerah sent the adventurer to reassign the workers to new roles,[17] allowing them to resume production and create a new vintage that Iltheux approved of.[18] Once all three vulpera completed their tasks and returned to Orgrimmar, Baine realized that he had been wrong to dismiss them so quickly and offered them a place in the Horde, which they gladly accepted.[19] As a member of the Horde, Meerah and her alpacas can subsequently be found resting in the Valley of Honor next to Kiro, Nilsa, and Nisha.

Vulpera Hideaway
It's never safe to travel these dunes alone.

Temple of Akunda
You don't want to leave without your friends, do you?

[110 - 120] Knowledge of the Past
Dolly and Dot have built up quite an appetite. Pulling a cartload of trolls isn't easy work!

Vorrik's Sanctum
<Name>! I knew you'd come! I told them, "<Name> cares about the vulpera and won't abandon us."
I'm here to help too! Kiro and Nisha are rescuing vulpera slaves, and I'm organizing caravans to carry them out of here.
It's kind of scary, being so close to the sethrak. But I know it's the right thing to do. Nisha said so.
Oh, welcome to our little hideout, by the way.

The same thing you are, I assume. Look at the vulpera in here... They're hurt and need someone to help them.
The Faithless have enslaved countless of us and forced us to work and fight for them.
We've never been able to stop them before. But Nisha and Kiro have shown us that we can fight back.
At night, Kiro and the others sneak into the slave camp below and rescue the most vulnerable vulpera.
They bring them back here. Then I secure safe passage out to the dunes, where we have caravans waiting to take them away to safety.
It's dangerous, and I'd much rather be back in camp, listening to Ahna sing a song around a cozy campfire. But how I could I when I know that my friends need my help?

Oh, that's the best part! You probably didn't even see them on your way in, huh?
Sneaky vulpera are hiding all along the escape route, keeping an eye out for Faithless!
When they know it's safe to travel on the road, I lead some of the vulpera out and meet with the caravans who'll take them to safety.
Then I sneak back in and get ready to take another group. It's very exciting and I've only cried in fear three times so far!
If you need to leave, just pop out of the cave and head west. Cross the bridge into the ruins and you're home free.

Nisha's been stirring up trouble down at the slave camp. Just head west out of the cave, and down the first ramp on your right.
When in doubt, listen for the sounds of sethrak dying and go toward 'em. She'll be close by.

Kiro's hard to keep track of. Always on the move, always working on some big plan.
He left with Nisha. But, last I heard, he was heading down into the gulch to steal supplies or sabotage the cannons or something.

Orgrimmar
It's really great to see you, <name>.