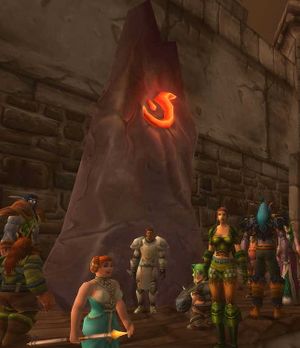 The Meeting Stone outside Stratholme 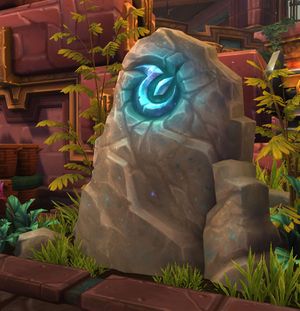 The Meeting Stone outside The MOTHERLODE!! in Dazar'alor.

Meeting Stones, also known as Summoning Stones, are very large thumb-shaped stones with a mystical, glowing symbol that appear next to instanced dungeons. Originally,[1] they were for filling in partial (or just-starting) parties whose members met the required level range[2] by auto-inviting suitable candidates.

In Patch 2.0.1, Meeting Stones were reworked with the implementation of the new LFG system. They now are used to summon party members to the stone near an instance. One player targets a faraway player and clicks the Meeting Stone, creating a portal. When a second player clicks the portal, the targeted player is given a summoning dialogue very similar to the warlock's