Mekgineer Thermaplugg is a level 29 elite mechanical boss found in the Tinkers' Court of Gnomeregan. He was once a proud and ambitious gnomish engineer who sought to make Gnomeregan a great and powerful nation, but his greedy desire for power combined with a lust for revenge against those he felt had cheated him from his rightful place in gnomish society turned him into the greatest traitor in Gnomeregan's history.

Murderer, traitor, and self-proclaimed king of the gnomes, the mekgineer Sicco Thermaplugg rules over the radioactive halls of Gnomeregan with a malfunctioning iron fist. His subjects are numerous, vicious, and insane enough to defend their crazed king against any intrusion from the upper world. It is Thermaplugg's madness that makes him so dangerous; he possesses the cunning to destroy everything around him, with no thought for his own life. There is a reason that even the monsters of Gnomeregan fear him. 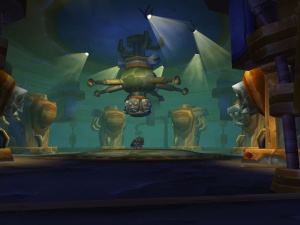 Thermaplugg will probably be quite a hard fight for you. Thermaplugg activates (via lightning) bomb dispensers, which create homing, exploding Walking Bombs. The bombs can be killed (without exploding) via a relatively small amount of damage, but the key is to prevent them from being created. Buttons on the side of active machines can be pressed to deactivate the dispensers. You may find assigning one party member to button duty to be effective, while others have vouched for a zone-defense strategy where some amount of buttons are assigned to different players, to reduce the time to run to them. With proper clearing, there will be no non-bomb adds. One of Thermaplugg's attacks is a knockback which reduces the threat of the party member knocked back. A warrior may find taunts sufficient to hold interest, while other tanks at this level may have more trouble. You should probably have a second character (offtank, or DPS) intentionally staying above your healer in threat. The fight will take a while.