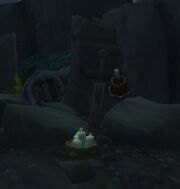 Melba was a vrykul brewmaster famous for her recipes' taste and potency. Her brewery used to ship barrels every day. Goldenapple, sweet and crisp. Black Brew, dark and bitter. Woodheart, oaken and bright. Her

[110] Storm Brew however was the rarest and most desired of her recipes, it was even said that the thunder god Odyn served this brew in his hall of champions. Morjirn, head brewer of a nearby clan, harboring jealousy of Master Melba's skill, sent a band of raiders to kill her, and steal the recipe.[1][2][3] After her death, Odyn welcomed her in his Halls of Valor, where she provides brews for his champions.[4]

Melba had an apprentice, Aegira, whom she taught me everything she knew, including the fighting techniques of ancient vrykul brewer-kings and queens. When she became of age, Aegira sought to avenge her death, and succeeded with the help of the Grandmaster of the Broken Temple.[5]

In the Halls of Valor

After I died, Odyn granted me passage to his fabled Halls of Valor. It is here that his warriors feast and celebrate in eternal glory. I humbly provide his champions with their favorite brews.