Mellok, Son of Torok is the son of Torok Bloodtotem, chieftain of the Bloodtotem tribe of Highmountain tauren. He is first seen at Thunder Totem, but later joins his father and the rest of his tribe in swearing allegiance to the Burning Legion and transforming into Feltotem, and is found as a killable vignette at Torok's Bluff. The Wardens want the Illidari to deal with him. 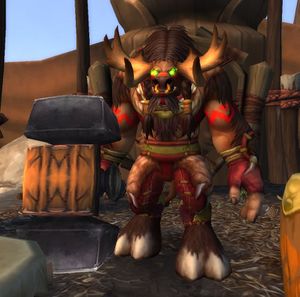 Thunder Totem
Bloodtotem Trapper says: Mayla cannot even stand against the drogbar. What hope does she have against the Legion?
Mellok, Son of Torok says: We are done with the Highmountain. The Bloodtotem must look to new allies.

To check whether Mellok has been killed, copy and paste this command into the chat window:

If a "true" appears in the chat window, Mellok has been killed; "false" indicates the opposite.