Menethil Harbor (men-a-thill) is a dwarven[2] port town on the western shore of the Wetlands, on a small island. It has a boat that sails to Theramore Isle in Dustwallow Marsh, on the continent of Kalimdor, and an icebreaker that goes to Valgarde in the Howling Fjord on the continent of Northrend. Within the city are many vendors; a First Aid trainer, the Deepwater Tavern, and a gryphon flight master. Besides the keep there is also a blacksmith and an inn.

Menethil is a rough place that plays host to sailors, travelers, smugglers, and pirates.[1] Except for the bridge, the only other ways of entering the town is by sea or by a secret underground path leading from the town to the mainland.[3] 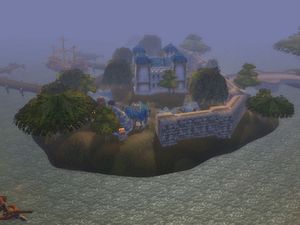 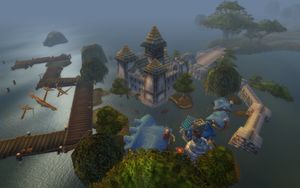 The place that would later be known as Menethil Harbor was originally chosen by Orgrim Doomhammer to be the place where his invasion fleet would be built. Sailing straight to the Hillsbrad Foothills would let the Old Horde avoid the ground defenses of the Alliance of Lordaeron.[4]

After the Second War the area was conquered and rebuilt as an Alliance harbor town under the direction of Admiral Daelin Proudmoore, named Menethil Harbor in honor of the king of Lordaeron, Terenas Menethil II. The forces of the Horde of Draenor attacked the harbor in order to steal ships and set sail for the Tomb of Sargeras.[5]

Menethil Harbor still serves a critical purpose as it serves as a link between the old nations of Khaz Modan and Stormwind, and the relatively new Alliance settlements at Theramore Isle and Valgarde.

During the war against the Lich King, raptors attacked the harbor.[2]

With the Cataclysm, Menethil Harbor was partially flooded but continued to be inhabited. The docks now float and sandbags are set up throughout the town. Many of the town's inhabitants currently reside on small islands or within rowing boats, and the keep has been taken over by Dark Iron dwarves. Most of the right side of Menethil, as you enter the town, has been sunk or destroyed. The Maiden's Virtue, the ship that has been docked at Menethil Harbor for the past five years, has also sunk beneath the waves. 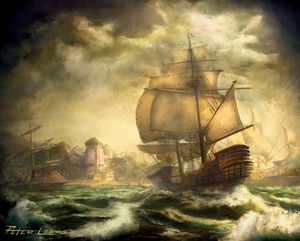 Menethil Harbor in the TCG. 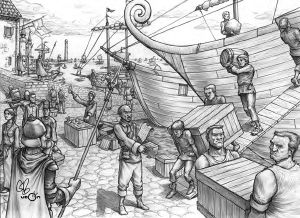 Menethil Harbor in Lands of Conflict.

Menethil Harbor is the only stationary Alliance presence in the Wetlands, a small well-fortified city that numbers a little over ten thousand souls. This major port city represents the Alliance presence in the Wetlands. Alliance forces established the current Menethil Harbor at the end of the Third War as the main sea link between Khaz Modan and the kingdoms of Alliance, but the area is still wild and untamed.[6]

Murlocs and Dragonmaw orcs are a constant threat to its citizens, who are braver and sterner than their kin. Captain Stoutfist, the town's military leader, can be found in Menethil Keep working to repel the Dragonmaws. The captain is particularly concerned because the orcs seem to be preparing for a major assault.[6]