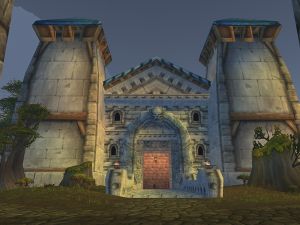 Menethil Keep is the fort that dominates the Alliance port town of Menethil Harbor. It is led by Captain Stoutfist, the commander of the Menethil militia. Besides several guards, it also normally holds a few additional quest givers and a vendor.

During the flooding of Menethil Harbor during the Shattering, the keep and some of the adjacent area was saved due to being on slightly higher ground. Sandbags are used to hold off the tide in more vulnerable areas, giving local merchants a safe and dry place to sell their goods. With the destruction of Menethil's horse stables, the horses are being temporarily kept on the western side of the keep.

Shortly after the flooding, Menethil was assaulted by a particularly insane band of Dark Iron dwarves led by Horghast Flarecrazed. Captain Stoutfist and the guards rushed to the aid of the townsfolk, with Stoutfist being injured by the assault by Flarecrazed. To the surprise of the guard, the Dark Irons proceeded to hole up inside the keep. Captain Stoutfist enlists the aid of players to kill the Dark Iron commander.[1]