For information on how to defeat Mephistroth in Cathedral of Eternal Night, see Mephistroth (tactics).

Mephistroth is a horrifically powerful nathrezim,[2] second only to Tichondrius and Anetheron. Mephistroth remained in the Twisting Nether during the Third War.[3]

Following the death of Goremaw the Devourer, Sargeras' personal hound, Mephistroth believed that Goremaw could still serve the Legion. He extracted the felhound's fangs and took them to a great demon forge on the eredar homeworld of Argus. There were many challenges in preserving the fangs' dark energies. Mephistroth dared not handle the task himself. His subordinates were eager to distinguish themselves, even at great risk. But the fangs' twisted power often proved too dangerous. When it pierced their minds and inflicted unspeakable agony, the dreadlord simply discarded them, giving their souls to the demon forge and finding another servant to take their place. But in the end, their work was successful. The fangs had been sharpened to a permanent edge, their shadow powers preserved for all time. Mephistroth had created the Fangs of the Devourer, two of the deadliest weapons the universe had ever known. These daggers could twist the air and bend light, allowing their wielders to conceal themselves effortlessly. He presented the daggers to Sargeras, who was greatly pleased. Goremaw had been a terror on the battlefield; in the hands of a skilled assassin, its fangs would be a terror in the shadows.[4][5] At an unknown point of time, he came into possession of the

[Skull of the Man'ari], which has allowed him to enhance his abilities to summon and command demonic armies for the Legion.[6] 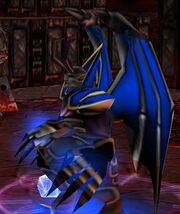 Mephistroth is briefly seen in a Dreadlord citadel conversing with Tichondrius and Anetheron about the status of the Scourge as Lord Archimonde demanded a report. When Tichondrius brought up his suspicion that Ner'zhul may have ulterior motives for his champion, Mephistroth was quick to dismiss his concerns claiming that Ner'zhul wouldn't dare undermine the legion's efforts. Anetheron then stressed that the only concern should be that the Scourge accomplishes its job in bringing back the Legion as otherwise Archimonde would have their heads. With Tichondrius stressing that the Lich King would not jeopardize the Legion's return, the three dreadlords departed.[7]

Mephistroth was one of the many demons summoned by Gul'dan in front of the Tomb of Sargeras to attack the forces of Azeroth in the climactic, disastrous battle at the Broken Shore.[8]

Mephistroth was later found at Felsoul Hold in Suramar, where he battled the First of the Black Harvest who had come to take the

[Skull of the Man'ari] and escaped before he could be defeated.

The warlocks of the Black Harvest dealt another great blow to Mephistroth as they submitted the Eredar Twins, Lady Sacrolash and Grand Warlock Alythess, under their will using Kira Iresoul's Bloodstone.

Mephistroth orchestrated the Legion's invasion from the Broken Shore. After mana bombs were used to destroy his Legion ship, Mephistroth battled the order leader who was attacking him while the united order halls of Legionfall assaulted the Legion on the island below. Partway through the battle, the dreadlord fell back to the Cathedral of Eternal Night, where he employed all his cunning to ensure the heroes failed in securing the

[Aegis of Aggramar].[9][10] He was defeated by Illidan Stormrage and the order leaders while Maiev Shadowsong guarded the entrance to the room from demons. After he is killed, the Aegis of Aggramar is activated.

Assault on the Broken Shore 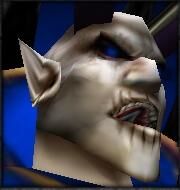 It is speculated by fans that he took the place as the leader of the nathrezim after Tichondrius's and Anetheron's defeat, as he is the only known dreadlord to have not been defeated during the Third War.