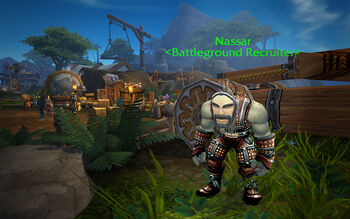 “Keep your friends close, and your enemies closer”[1]

Mercenary Mode allows players to enter unrated battlegrounds and Ashran as a member of the opposite faction. Players are transformed into an appropriate race and fully function as an indistinguishable member of their new team. Only available when a faction is experiencing long wait times, the feature aims to reduce queue times for these types of play, while still preserving the lore experience of factional conflict.

Mercenary Mode is only available to players whose faction is currently experiencing long queue times for unrated battlegrounds and/or Ashran. At these times special NPCs will appear in the faction capital (Warspear for Horde, Stormshield for Alliance), offering players access to the mode.

Entering a battleground or Ashran through these NPCs will cause the player to be converted into a member of the opposite faction. Non-pandaren will be transformed into an appropriate race, including an exchange of racial traits. Players will function as regular members of their converted faction, and will not be marked in any way as mercenaries.

Players acting as mercenaries will still be able to earn the usual rewards for their participation, with the exception of any faction-specific achievements.

Mercenary Mode does not apply to PvP Brawls.[2]

[Mercenary Contract] is the buff obtained upon speaking to a mercenary recruiter and becoming a mercenary for the opposing faction.

The two Horde recruiters are:

The two Alliance recruiters are:

The recruiter NPCs are ONLY visible when the queue time for your faction is exceptionally high.

Which race the player becomes

Which race the player becomes is based on the players starting race and class.