For the Abyssal Depths mob, see Merciless One.

Merciless ones, also called mindbenders,[1][2] mind-squids,[1] mindstealers,[3] and zoatroids,[4] are octopus-like cyclopean[5] parasitic aberrations[2] related to the Old Gods, primarily found alongside naga forces. They are capable of attaching themselves to (and/or devouring)[6] the heads of sapient beings in order to enslave them. Part of the process involves using an internal organ to assail their victim's minds with a deafening psychic scream. The creatures themselves seem to be built for the sole purpose of serving the Old Gods and harassing the minds of mortals.[1] Merciless ones have beaks.[7][8] Apparently they are also quite smelly.[6]

Merciless ones are apparently somehow related to the squid-like kraken, who physically resemble them but are far larger. Artisan Itanu refers to mindbenders as the "children" of the kraken patriarch Ozumat,[1] who once attached himself to the head of Neptulon in a manner similar to a merciless. In addition, the spawn of the kraken Jiao are also merciless ones.

Merciless ones fought alongside Ozumat and faceless ones against the kvaldir in the past.[9]

In the present, the merciless ones were first seen by the adventurer before the assault on the Abyssal Maw, recruiting/possessing gilgoblins.[6] Following Neptulon's capture,[10] Erunak Stonespeaker was abducted by the naga and enslaved by the merciless one Mindbender Ghur'sha within the Throne of the Tides.

Merciless ones infected shipments at Anglepoint Wharf in Tiragarde Sound,[12][13] latching onto the workers who are then controlled to in turn spread more merciless ones into the shipments.[3]

A great many merciless ones were seen in the service of Queen Azshara and N'Zoth during Nazjatar storyline. Called "zoatroids," they are bred in massive numbers in two locations: The Chamber of Harvesters in the deep tunnels of northern Nazjatar and watched over by the Shirakess naga, and The Hatchery which is protected by a massive merciless one known as Orgozoa.[14] 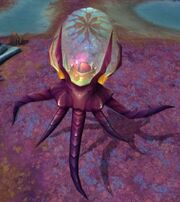 [Syd the Squid] has a chance to drop from

[Greater Darkmoon Pet Supplies], although it's possible it's simply a squid that uses the merciless one model, rather than an actual merciless one.