From Wowpedia
(Redirected from Merithra)
Jump to: navigation, search 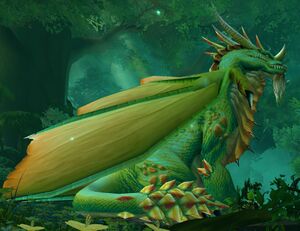 The green dragon Merithra of the Dream is a child of the Dragon Aspect Ysera and was a major figure of the War of the Shifting Sands. She was taken captive in the Temple of Ahn'Qiraj under a mortal, night elf form by the qiraji, along with the red Caelestrasz and the blue Arygos. She and Arygos offered to craft weapons in exchange for

Many years later, during the Fourth War, Merithra seems to have taken de-facto leadership of the green dragonflight. Working with a mortal hero, she helped save the Emerald Dream from an infestation of the Void. While not confident she can live up to the legacy of her deceased mother Ysera, she accepted the role nonetheless.

During the War of the Shifting Sands, the dragon Anachronos enlisted the bronze dragonflight and fought alongside the night elves against the qiraji. The sheer numbers of qiraji and silithid proved overwhelming, however, and so Anachronos called upon the progeny of the other dragonflights, including Merithra of the green dragonflight.

Along with Caelestrasz and Arygos, she helped push the qiraji back into Ahn'Qiraj which allowed Anachronos, Fandral Staghelm, and the night elves to create a magical barrier to seal the fortress. The three dragons and their companions flew headlong into the insect city as the Scarab Wall was erected behind them, leaving them imprisoned within the walls of C'Thun.[1]

With the betrayal and death of Arygos, and the death of Caelestrasz in the Bastion of Twilight, Merithra became the last one alive of the three former captives.

She joined her mother at a meeting of the Wyrmrest Accord following Deathwing's defeat. The Emerald Nightmare within the Rift of Aln had begun acting up and seemed to be seeking a new Nightmare Lord. Ysera told Merithra that protection of the Emerald Dream now fell upon the druids.[2] 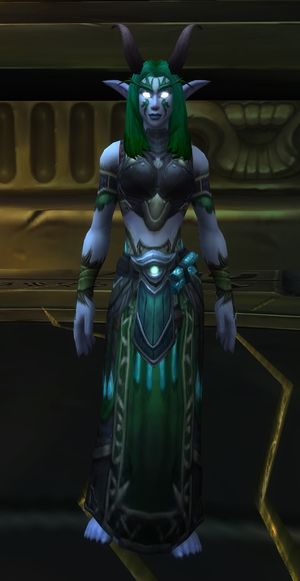 Merithra in the Chamber of Heart.

During the Fourth War, the Emerald Dream was invaded by terrible creatures of the Void, causing Merithra to call for aid as she was doubtful that she could combat this threat on her own.[3] After entering the Dream, she directed her allies to combat the Void in order to secure the Emerald Dreamway,[4] and to acquire fragments of the dragonflight's power.[5] She became distressed upon learning that Karkarius and Thessera chose to give up and embrace death rather than fight for their lives.[6]

Agreeing to help empower the

[Heart of Azeroth], Merithra ventured to the ancient heart of the Emerald Dream, where she planned on empowering the Heart of Azeroth with the essence of her dragonflight. However, she was surprised to discover that the area was withering in the Void's grasp.[7] She subsequently asked her allies to destroy the Void forces in order to continue with their quest, and personally felt responsible for the corruption that had taken hold.[8] Believing that Ysera would be pleased that some of the green dragonflight's power would go toward saving the world, Merithra had her allies throw the emerald fragments in the lake, where she and other green dragons combined them with their power into a powerful dragonscale.[9]

With the Emerald Dream fighting back against the Void, Merithra directed champions to bring the dragonscale back to Magni Bronzebeard in the Chamber of Heart. She subsequently made her way to the chamber as well, where she channeled her power into the Heart Forge and expressed pride in standing with the other dragonflights in defense of Azeroth.[10]

She later journeyed to Mount Hyjal after sensing the distress of Nordrassil caused by Azerite elementals invading the area.

Merithra later returned to the Chamber of Heart where she joined Kalecgos, Alexstrasza, Ebyssian, and Chromie in empowering the Heart of Azeroth.[11] In a conversation with her aunt Alexstrasza, Merithra asked what her mother had truly been like before she became an Aspect and expressed doubt that she would be able to live up to Ysera's legacy, but explaining that none of the Aspects knew either, Alexstrasza encouraged her to have faith in herself.

Heroes of the Brood? C'Thun must be banished! We can assist you, mortal!

Succumb to the endless dream, little ones. Let it consume you!

I fear that even if Azeroth is saved, my brothers and sisters of the green dragonflight are doomed. Still, we will do everything in our power to help save the world.

Who are you? I am Merithra, daughter of Ysera, the dreamer.

I had thought that she would be here forever. Until she wasn't.

For eons my flight has watched over the Dream and the realms of nature. I cannot hide from this duty. Even if I fail, I must try.

There is too much at stake to do nothing.

Ysera, the Dreamer, lost her life in Val'sharah after she was corrupted by the Nightmare.

In the end, it seemed as if Elune welcomed her spirit with open arms. I pray she is at peace.

I could feel the distress of Nordrassil deep within the Dream. With all that this world has endured, we cannot lose another great tree. Thankfully, we have you on our side, and the Heart of Azeroth.