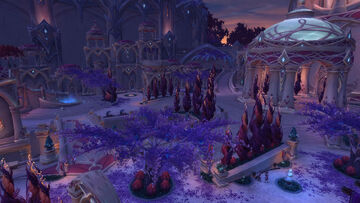 The Midnight Court is a large public square located in the eastern part of the Court of Stars in the nightborne city of Suramar. The majority of Suramar's nobility reside within the Midnight Court, which can be found in the most affluent area of the city. The Jeweled Estate, one of the largest and most ornate buildings in the city, dominates the northern section of the court.

The location can be accessed via the Gilded Market in the west, which connects it to the rest of Suramar, and has access to Suramar Bay in the form of the Moonlit Landing to the south. A canal, beginning near the Terrace of Enlightenment, runs all the way through the center of the Noble District, terminating in the Midnight Court just short of the Jeweled Estate.

The Midnight Court and its surrounding district would become a major target for the insurgents during the Nightfallen rebellion due to its association with the city's ruling powers. Much like the Gilded Market, the area was under extremely heavy guard for the duration of the rebellion, hosting contingents of Duskwatch, nightborne constructs, Felborne, and demons of the Burning Legion.

Nightborne society developed independently for the 10,000 years it spent totally isolated under their arcane shield following the end of the War of the Ancients. The people of Suramar would continue to maintain the rigid class structure they inherited from the Kaldorei Empire before them, with a wealthy aristocratic elite holding political power. This segregation of nightborne society was evident in the city's very layout; the lower classes generally inhabited the districts in the west, while the nobility occupied the eastern areas, mainly the Court of Stars. The Midnight Court and the Gilded Market would form the nucleus of this Noble District.

With the arrival of the demonic Burning Legion and the lowering of the great shield, Suramar City was thrown into chaos. The Nightfallen rebellion would eventually erupt, as insurrectionist nightborne sought to overthrow Grand Magistrix Elisande and her aristocratic supporters and expel the Burning Legion from Suramar. As a result, the Midnight Court and its surrounding district would quickly become a major target for the rebels, though the area had since been heavily occupied by demons and other forces loyal to Elisande. In particular, an elite demonic guard was known to protect the square and the Jeweled Estate, led by Talixae Flamewreath and her council. 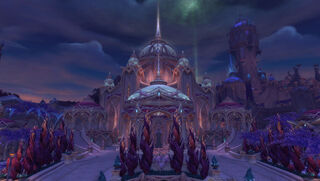 During a ball held at the Jeweled Estate on the Midnight Court relatively early in the conflict, Elisande herself was due to make an appearance in order to reassure her supporters after recent events. The Nightfallen rebels, seeking to neutralize the Grand Magistrix early on, managed to infiltrate the Court of Stars with agents in disguise. After fighting their way to the Midnight Court, the rebel group engaged Talixae Flamewreath and her demonic forces guarding the entrance to the Jeweled Estate itself and entered the party undetected. Though they would not succeed in eliminating Elisande, they did slay Advisor Melandrus, a high-ranking figure.[1]

Rebel agents also operated throughout the Midnight Court later on orders of Lady Ly'leth Lunastre, who sought to discover the identity of an enemy adherent in House Stelleris. Ly'leth's operatives succeeded in interrogating Stelleris nobles, and would go on to assassinate the thug Corvelyn in the nearby Moonlit Landing.[2]

Nightfallen operatives would continue to carry out further assassinations of key figures within the Midnight Court and Noble District. Callus, Garion, and Leleyna were three such nightborne lieutenants eliminated as part of this effort to consolidate the insurrection's successes.[3]

As the conflict progressed, the Nightfallen began to launch direct attacks on the Midnight Court itself, highlighting how powerful and far-reaching the rebellion had now become. Through the use of telemancy orbs provided by Chief Telemancer Oculeth, insurgents were able to teleport entire squads of withered into the district, which fell upon the noble loyalists and caused heavy casualties.[4]