The Might of Kalimdor was a combined Alliance-Horde army, under the command of the orc Varok Saurfang,[1] raised in response to the stirring of the Qiraji who were locked behind the Scarab Wall in Silithus. They were gathered at Cenarion Hold — in the center of the silithid hives that dominated the region — during the Ahn'Qiraj War Effort.

High Overlord Saurfang stands before the Might of Kalimdor.
High Overlord Saurfang yells: I am Saurfang. Brother of Broxigar. You know me to be the Supreme Commander of the Might of Kalimdor. An orc - a true orc warrior - wishes for one thing: To die in the glory of battle against a hated enemy. Some of you have fought in battles. Peace has been with us for many years. Many years we sat idle but many years we battled. In those years - where strife, the land and Legion and Scourge, sacked our homes, killed our families — these insects dwelled beneath us. Beneath our homes — waiting. Waiting to crush the life from our little ones. To slay all in their path. This they do for their god. And for our gods? We defend. We stand. We show that as one. United. We destroy. Their god will fall. To die today, on this field of battle, is to die an orcish death. To die today is to die for our little ones. Our old ones. Our … loved ones. Would any of you deny yourselves such a death? Such an honor?
Ironforge Cavalryman says: FER MAGNI!
Kaldorei Marksman says: FOR HONOR!
Highlord Leoric Von Zeldig yells: I am with you until I gasp my last dying breath.
High Commander Lynore Windstryke yells: FOR KALIMDOR! 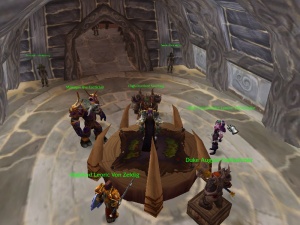