Millhouse "Jerimus" Manastorm is a wily gnome mage of questionable morals, that is ready to light someone up at the slightest provocation.[1]

He first appeared as a prisoner trapped in the Arcatraz wing of Tempest Keep. In order to acquire

[The Tempest Key], formerly required to unlock The Eye wing of Tempest Keep, players must enter Arcatraz on heroic mode, and make sure that Millhouse survives until the death of Harbinger Skyriss. He is released during the second wave of the Harbinger Skyriss encounter in the Arcatraz. His rescue was also required part of

Later on, Manastorm appeared scheming with the Twilight's Hammer in Deepholm and yet later in the Brawler's Guild in Stormwind City and Orgrimmar as an opponent.

If the player upgrades an inn to Level 2 at their Tier 2 garrison on Draenor, Manastorm will show up with a dungeon quest, unlocking him as a follower.

Millhouse is married to Millificent Manastorm, who seems to be the complete opposite of her husband.

While the Arcatraz is a place of imprisonment for dangerous beings the Naaru encountered, Millhouse, in fact, was merely a victim of circumstance - a stowaway who was in the wrong Naaru vessel at the wrong time.[2] It is unknown how he actually got to a Naaru vessel but it's quite possible that his curiosity over the mysterious Naaru and his knowledge of the Arcane played a major part in his entry.

In combat, he appears to be a jack of all trades, using Improved Frostbolts,

[Improved Arcane Missiles]. Of course, most elite NPC's have grown beyond the simple boundaries of talent specs, and Millhouse is no different.

Since the Cataclysm, Millhouse returned as a member of the Twilight's Hammer cult. It was perhaps the proximity near the harbinger that led to his joining to the cult.[3] He was involved in their operations in Deepholm, and appeared numerous times in the Stonecore. He had apparently acquired a new spell called "Impending Doooooom!", but its effects were unknown as he was interrupted by the arrival of Corborus. He and his Twilight's Hammer loyalists were knocked over the precipice, and was suspected to have been killed in the impact.

Having survived, he joined the Brawler's Guild as a gladiator. Apparently, the Stonecore was merely a setback.

If the player has a Level 2 inn, which becomes available beginning with their Tier 2 garrison, Manastorm will show up on the second floor as a quest giver. After quickly assuring the player that he's changed, he asks for help in collecting a piece of equipment for a humanitarian project he's working on. After helping him out, he joins the growing fort as a follower.

Millhouse is searching for the

[Nightborne Soulstone] within the Arcway tunnels near Felsoul Hold, only to be captured by the Burning Legion. When the Archmage of the Tirisgarde, accompanied by Kalecgos, comes searching for a corrupted Archmage Vargoth within the tunnels, they free Millhouse and join forces. Eventually, the two find Vargoth within the tunnels, but the possessed mage manages to escape. Afterwards, Millhouse joins the Tirisgarde to aid in their search for the Soulstone.[citation needed]

Eventually, the Tirisgarde succeeds in rescuing Vargoth and manages to use the Soulstone to imprison Kathra'natir, the dreadlord possessing the mage. During the following celebration, Millhouse tries to claim his prize, only for Khadgar to refuse him, promising instead to aid him in search of other artifacts. Millhouse then runs off, exclaiming "You're not my friends anymore!".[4] He remains a Champion of the Archmage, however.

He sent an image of himself to the Violet Hold battling with the adventurers against his wife, Millificent Manastorm who managed to escape.

[98 - 110] Finding Ebonchill, the player finds a book titled "The Manastorm Decision," mentioning Millhouse as being the son of the dangerous Magnus Manastorm. 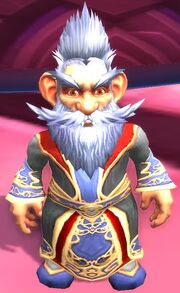 Millhouse Manastorm in the Arcatraz 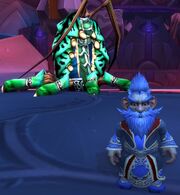 Millhouse stands triumphant over his foe.

As he buffs himself

Aggro
Aaalllriiiight!! Who ordered up an extra large can of whoop-ass?

Death
You'll be hearing from my lawyer! 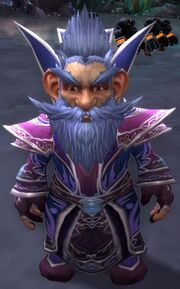 I wonder if this world has any world-destroying artifacts? We can't allow them to fall into the hands of the enemy, you know!

Millhouse appears as a legendary card in Hearthstone. His flavor text reads: "I'm gonna light you up, sweetcheeks!"

Millhouse's presence in Deepholm as a member of the Twilight's Hammer could be a product of his extended stay in the Arcatraz next to Harbinger Skyriss, who's presence may have had severe consequences on his mind, and he began to hear the voice of the Old Gods. It is unlikely that he was already a member prior to his entrapment, as he would have most likely assisted Skyriss had he been a Twilight's Hammer member.