Mindflayer Kaahrj is a n'raqi boss in Assault on Violet Hold. 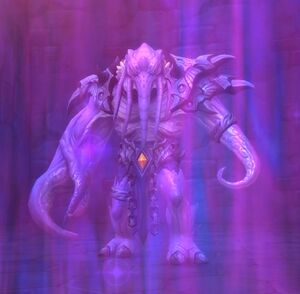 Kaahrj in World of Warcraft.

This eldritch creature was captured in the depths of Ulduar, ensnared as it lapsed into a catatonic state after the defeat of Yogg-Saron. Since Dalaran arrived at the Broken Isles, the monstrosity has mysteriously awakened, and only the powerful wards of the Violet Hold keep its powers in check.

Mindflayer Kaahrj attacks the party with his Shadow Crash and Hysteria spells. At 80% and 40% health, Mindflayer Kaahrj casts Eternal Darkness, ushering in a swathe of Faceless Tendrils to repeatedly damage party members.

Unlocking Seal
Lord Malgath yells: Your armor might protect you from blade and claw, but it is useless against this Faceless One. With a mere whisper, it can drive a mortal mind to madness.

The Black Empire once ruled this world, and it will do so again! Your pitiful kind will know only despair and sorrow for a hundred thousand millennia to come!

The Black Empire once ruled this pitiful world, and it will do so again! We will reforge our dread citadels atop the fly-blown corpse of this kingdom!

You will be the first of many to glimpse the madness of N'Zoth!

You are a prisoner in your own body. A SERVANT OF FEAR!

The will of N'Zoth is made manifest! IT CANNOT BE CONTAINED!

In the writhing shadow of N'Zoth, all light fades and dies.

Your soul will wander roads that twist in endless spirals.

The crooked serpent with no eyes is watching from the endless sky.

There is no light after death. Only a place where even shadows fear to go.

The blood of N'Zoth runs through me... I cannot die...

Kaahrj appears as a legendary card for the priest class in the Descent of Dragons expansion for Hearthstone. It's flavor text reads: "It's pronounced "Kaahrj.""