Minerva Ravensorrow is an undead death knight of the Knights of the Ebon Blade.

Minerva briefly appears at the beginning of

[98 - 110] The Call of Icecrown, the Frost artifact acquisition quest, walking with Dagnar Stonebrow from a terrace of Icecrown Citadel onto Acherus: The Ebon Hold.

Minerva plays a far bigger role in the Horde version of

[98 - 110] The Dead and the Damned, the Blood artifact acquisition quest. She was part of Margrave Dhakar's initial failed attempt to kill Gorelix on Niskara, but by the time the player and Baron Sliver discover her she has been imprisoned. Minerva directs the two death knights to killing Inquisitor Zalinor, who carries the keystone that unlocks her shackles. After being freed, she informs Sliver and the player that Margrave has been taken captive and that they will need to rescue him, but Sliver refuses, saying that the death knights are on Niskara to slay a demon, not rescue every failure who couldn't get the job done. Minerva is shocked at Sliver's response, but agrees to come with them anyway, though she swears to rescue Margrave the first chance she gets. That chance never arrives, as Gorelix kills Margrave when the three knights reach the foot of his citadel, but Minerva nonetheless assists in the fight against the Fleshripper.

During the Legionfall Campaign, Minverva was dispatched to the Pit of Saron by the Four Horsemen to retrieve

[Rimefang's Harness], a powerful relic used by the mount of Scourgelord Tyrannus during the War against the Lich King. She was later accompanied by the Deathlord of the Ebon Blade, only for them to find the pit under attack by Sveldrek vrykul seeking to use the frost wyrms for their own. Slaying their leader, Andjor Dragontamer, and raising many Sveldrek into undeath, the Deathlord and Minerva recovered the Saddle and returned to Acherus. Minerva was then dispatched to Thorim's Peak in Stormheim to begin raising the bones of deceased Thorignir. They also defeated the spectral Drekirjar Shrine-Keeper in order to retrieve Thorim's Flame. Using the flame, they summoned the broodmother of the dead thorignir, Daumyr, and subsequently slew her, raising her back into undeath. Returning to Acherus once again, the Ebon Blade were then directed to the Broken Shore to assault the demons there. With a combined assault from the Deathlord, the Four Horsemen, Daumyr, the Risen Thorignir, and Minerva, a good portion of the Legion's advance was crippled.

Minerva then became a champion of the Ebon Blade under the Deathlord.[1] 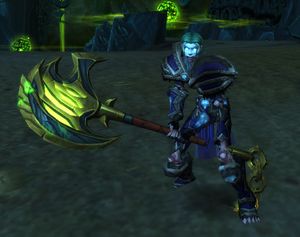