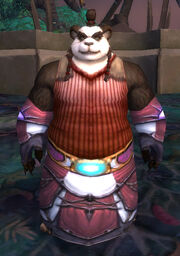 Your next challenger is another relatively new trainee. His name is Minh Do-Tan, and he has won his last two matches.

He will be waiting for you near the crane statue to the south.

(Minh Do-Tan: "Your next challenger.")

Well done, <name>. You are beginning to make a name for yourself.

Fly to the southwest side of the island. Equidistant from Angkhal Pavilion and the Pedestal of Hope, south of the pavilion and west of the pedastal, is a large crane statue. Standing in front of it is Minh Do-Tan. Speak with him:

I look forward to our melee. Of course, I plan to win.

Let's fight!
Minh Do-Tan says: Prepare for the beating of your life, weakling!

Minh is a level 90 pandaren with 787,000 health and the following abilities:

Straightforward fight, so take him out.

Fly back to the north end of the island to turn in.

Some time after completion, Ellia Ravenmane sends another letter...

I heard you beat Minh Do-Tan. Well, I've been training, too.

I've asked Thelonius to set up a rematch between you and I. This time, we'll see who's really the better fighter!