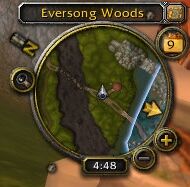 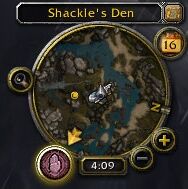 Minimap since patch 7.0.3 with the Class Hall Report button.

A miniature map of your character's surroundings. You can zoom the view in or out using the plus and minus keys. The name of your current zone or location appears above the minimap. Towns appear on the edge of the minimap as arrows, while party members, pets, and resource nodes appear as dots within the minimap.[1]

The map shows the following

Depending on the Rotate Minimap setting, either north (N) will be at the top or the map rotates so the top represents the direction you're facing.

A number of icons and arrows are displayed on the minimap to help you find your destination. Most of these are configurable and it may be helpful to turn some features off to avoid clutter. An up or down arrow connected to the icon tells you the location is above or below you. If an icon is shown in black and white it means that the location is inside a building or underground.

Usually only applies to Druids and Hunters with Track Humanoids.

If you click on the minimap, you can ping a location that is visible to other members of your party.

The minimap has zoom in (

) buttons at the bottom-right. There are six levels of magnification. If a button is gray it means that view is zoomed in or out as much as possible.