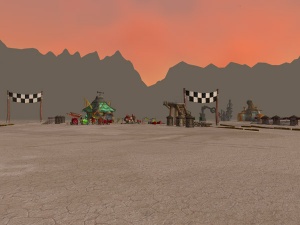 The Mirage Raceway (or Mirage Racetrack)[1] was built by the goblin Pozzik and gnome Fizzle Brassbolts as a result of their rivalry to prove the superiority of their respective race. The two also built rocket cars and enlisted teams to drive them.[2]

it was a race track, deep within the dry lake bed known as the Shimmering Flats.[3] After the end of the Third War, both the goblins and gnomes decided that the large alkali[citation needed]  desert known as the Shimmering Flats near Thousand Needles would be a perfect place to test their new rocket designs. The natural animosity between the two engineering teams created the perfect opportunity for races to see once and for all whether Goblin Engineering or Gnome Engineering was superior.

The Mirage Raceway eventually become a unique draw for both the Horde and the Alliance, as supporters came to cheer on their respective favorites. Races between the gnome and goblin drag cars took place daily, as both teams scrambled to come up with improvements that would give their side an edge. The track also drew a number of seedy types, attracted to the prospect of gambling on the winner.

In the RPG and early WoW, a crowd pummeler raced for the gnomish team.[citation needed]

During the Cataclysm, the whole of Thousand Needles was flooded by the ocean as a crumbling canyon wall collapsed into the Shimmering Flats. The Raceway, therefore, was submerged. Fizzle and Pozzik built a "Speedbarge" to float above the ruined raceway. 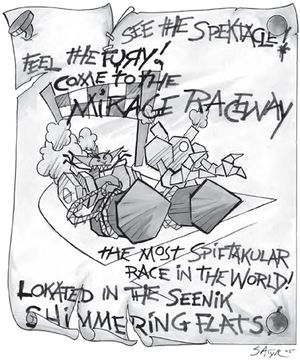 Goblin and gnome tinkers labored constantly to perfect the ultimate racing machines. At regular intervals, they participated in trials of their creations, and twice monthly the Mirage Raceway hosted a series of events to determine which side was the best. While no prizes were officially awarded, being "the best" was usually enough. Besides, there was plenty of betting going on behind the scenes to make a shrewd gambler a tidy fortune — or break the bank if he chose poorly.[3]

At the start of each month, the Mirage Raceway Independent Oversight Committee (MRIOC) announced the parameters for the next race (length, vehicle class, special rules, and so on). The first race was considered the "preliminaries", while the final race of the month determined the overall winner. The side that achieved victory then lorded it over the losers for the next month.[3]

Since MEGA sponsors the Fizzle and Pozzik's Speedbarge annual boat race and races similar to that,[4] it can be speculated that they sponsored the races of the Mirage Raceway before it was flooded and replaced by the Speedbarge.