Mirana Starlight is a night elf warden who answers to Maiev Shadowsong. Mirana was among a group of wardens sent to alternate Draenor during the conflict against the Iron Horde there, with the duty of protecting Archmage Khadgar.

After the end of the war, she joined her fellow wardens on the Broken Isles, where they maintained a base on the Isle of the Watchers under the command of Maiev Shadowsong. Later, with the beginning of the Fourth War, she pledged herself to the Alliance cause, and took part in the Battle for Darkshore alongside the other kaldorei.

Mirana Starlight was one of several wardens who journeyed to alternate Draenor at the onset of the war there, on the orders of Maiev Shadowsong herself. Under the direction of Cordana Felsong, they protected Archmage Khadgar as he worked against Gul'dan and the Shadow Council. Mirana herself was stationed across the continent, including Starfall Outpost in Shadowmoon Valley and Yrel's Watch in Nagrand. Though successful in protecting the Archmage, the group's cause would suffer a major blow at the defection of Cordana Felsong to the Burning Legion.

By the time of the Burning Legion's third invasion of Azeroth, Mirana and the other wardens had established a base on the Broken Isles, centered around the Vault of the Wardens prison complex. There, they made it their solemn duty to defend the facility and keep its residents secure against all threats. Not long after the Legion's arrival, however, the Vault would fall to the demons, aided in their efforts by a defected Cordana Felsong. In the wake of the defeat, Mirana and the survivors retreated to Wardens' Redoubt, determined to hold their ground. Mirana would survive the episode, and she and her sisters resisted the demonic incursion until the end of the invasion. 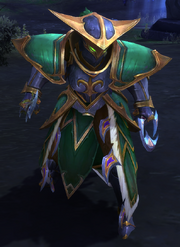 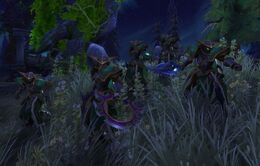 Following the events on the Broken Isles, Mirana and many of her fellow wardens followed Maiev Shadowsong in answering the call to join the Battle for Darkshore. Together, the wardens fought for the Alliance and their fellow kaldorei in attempting to drive the Horde from Darkshore once and for all. Mirana herself would be present during the transformation of Tyrande Whisperwind into the Night Warrior.[2]

She may be related to Sarin Starlight.